Good Apple Awards: The Children of Smithfield and their journey fighting for meatpacking workers and their families

This week, Appleseed is proud to spotlight The Children of Smithfield. A group of young leaders in Nebraska whose parents and loved ones work in meatpacking plants, their mission is to ensure plant workers are treated as essential—pandemic or not. 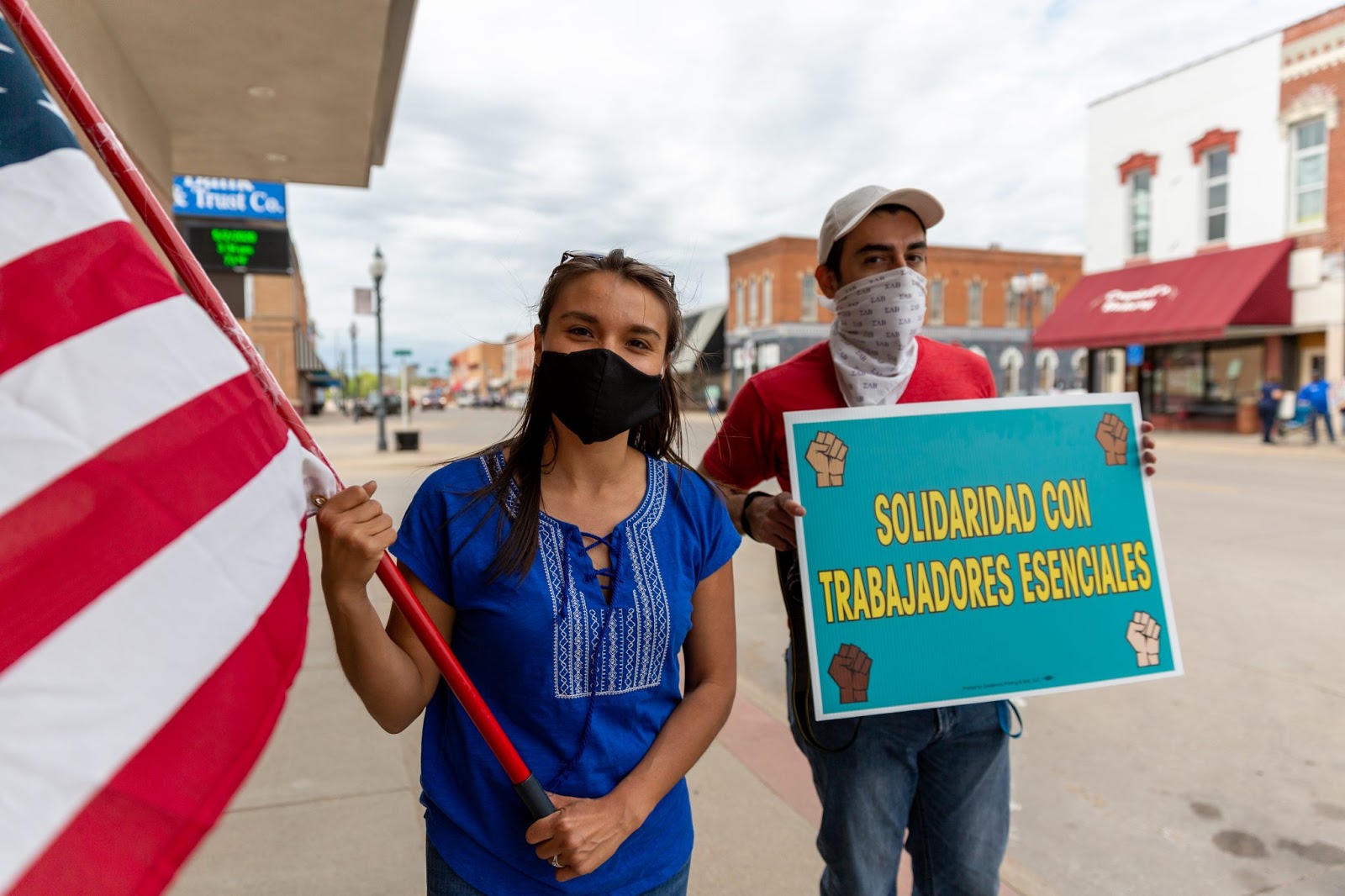 “Tu lucha es mi lucha. Your struggle is my struggle.” To see through someone’s eyes is the moment change begins.

It’s true for Maira Mendez, a young administrator at Lincoln High and the daughter of two meatpacking workers, as she spoke to a crowd on the steps of the Nebraska State Capitol at a rally earlier this spring.

For herself and others whose parents and loved ones work in meat and poultry processing plants across Nebraska, COVID-19 has compounded the issues they have been facing for years. It was in the sudden disruption amidst the pandemic that many began to notice issues decades in the making.

Working at a meatpacking plant is one of the most dangerous jobs in America. The meatpacking industry has a decades-long record of alarmingly high injury rates and dangerous work speeds that cause permanently disabling injuries. The fast-moving production lines and repetitive motions breed gruesome injuries, and leave workers with lifelong complications.

For many families, these jobs appear to offer a chance to achieve the American dream, with a less visible reality that can also be a nightmare. In cities like Crete, Grand Island, and Lexington, titans like Smithfield Foods, Tyson, and JBS USA, are among the largest employers in each region, and their impact on the livelihoods of those they employ is clearly felt.

For many, the long shifts offer the opportunity to buy a house, send their kids to college, and pass on the chance to shape their own dreams. These children know that for themselves and their families, something has been gained from these sacrifices.

Which is why they quickly grew concerned when COVID-19 erupted in the plants where their parents work.

“We acted out of love, care, and empathy and decided to fight for what was right.” Dulce Castañeda 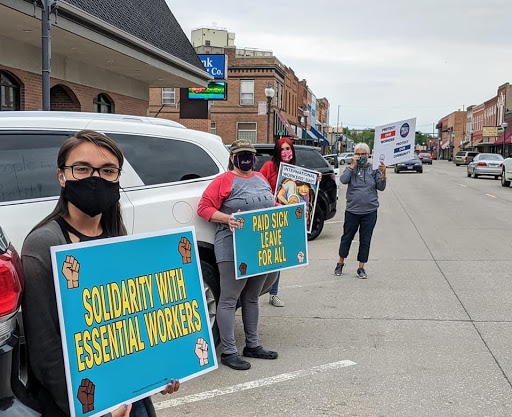 On Facebook, children of local workers began to connect and share the experiences and stories they heard from their parents. They voiced their frustrations and traded articles detailing how the growing pandemic was finding fuel in the plants their parents and loved ones worked at. Quickly, they discovered what every community was beginning to understand.

As the virus began to set a foothold in cities across Nebraska, a painful realization was becoming clear: meatpacking plants were becoming the epicenters of outbreaks. The workers and their families were at immense risk, and mitigation efforts were already failing to contain the spread.

Many of the workers inside the plants, who were now being deemed “essential,” feared sharing their concerns. The threat of retaliation by superiors and the uncertainty of their citizenship status left many trapped with an uneasy decision: go to work and risk exposing yourself and your family to the virus, or stay home without pay.

For the children of these workers, the urge to act on behalf of their parents grew, and as their conversations moved beyond Facebook as they began to plan concrete action, a name had sprouted: The Children of Smithfield.

“We were moved to act because we believed we could not stand by and watch our families and our communities fall ill as their concerns were silenced. We acted out of love, care, and empathy and decided to fight for what was right,” one of the founding leaders of The Children of Smithfield, Dulce Castañeda, a Legal Assistant for a private law firm as well as the former Community Assistance Director for the City of Crete, shared with us.

Meanwhile, Nebraska state officials and plant administrators continually stressed the need to keep plants open and production lines running, as if it would be possible to continue food production without healthy workers.

In March, an investigation by ProPublica revealed Smithfield Foods CEO sent a letter to Nebraska Governor Pete Ricketts that included, “We are increasingly at a very high risk that food production employees and others in critical supply chain roles stop showing up for work.” He added social distancing was “a nicety that makes sense only for people with laptops.”

“Meatpacking workers are largely overlooked or forgotten about and they deserve to be valued, respected, and treated with dignity – not only for the labor they perform, but for their humanity.” Dulce Castañeda 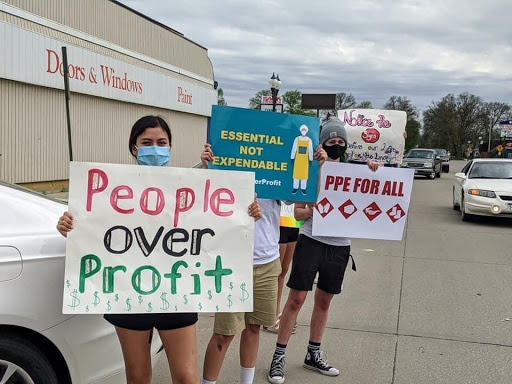 Soon afterwards, The Children of Smithfield, brought their movement directly to Smithfield. At a processing plant in Crete, they organized a socially-distanced drive-by car protest. Participants honked their horns in solidarity, and signs exclaiming “People Over Profits” and “PPE For All” were pointed towards the plant.

For the young organizers, it was a reminder of their ability to bring about change, “My participation in this work has reiterated a long-standing belief that representation and inclusion are imperative in order to protect the most vulnerable members of society. I see my and our roles as elevating worker voices and helping to build worker power,” Dulce shared.

COVID-19 cases, however, began to sharply climb in early-spring. It was only until after this spike that Smithfield announced their Crete plant would close for up to two weeks. For the workers and their families, relief had finally arrived. Then it vanished.

In a stunning reversal, Smithfield reversed their decision and instituted a reduced schedule aimed at ensuring production lines continued and supply chains uninterrupted. The movement had to reach a new level, and in ways never before seen, it did.

In April, 50 employees of the Crete plant walked off the job in protest. The action reverberated through the community, and momentum flowed into subsequent car vigils. The parking lot had given way to a parade of cars, as more community members were coming to the side of their friends and neighbors.

“Their community vigils lifted up messages that echoed through news and social media: ‘Nebraska United,’ ‘We are with you,’ “My parents are more important than meat,’” said Darcy Tromanhauser, Appleseed’s Immigrants & Communities Program Director.

In the face of climbing cases elsewhere, the protests and vigils spread to other plants across Nebraska, and what had started as a Facebook group chat had become a connected movement to spotlight the issues that had persisted in plants for decades, and signaling now was the time to address them—together. 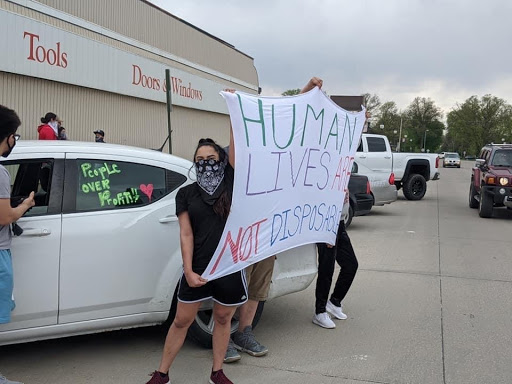 “This is the beginning of long-overdue conversations about human rights, workers’ rights, and racial justice as they pertain to workers, many of whom are black, indigenous, and people of color,” Dulce shared. “Meatpacking workers are largely overlooked or forgotten about and they deserve to be valued, respected, and treated with dignity – not only for the labor they perform, but for their humanity.”

A summer of protest has given way to expanded advocacy, and The Children of Smithfield are sustaining their momentum by continuing to meet, connecting with policymakers, and inviting community members to join the movement. As the issues within meatpacking plants continue to become increasingly evident, it’s clear many have taken up the mission, too, Dulce notes.

“I am inspired by all of our incredible members and the passion and drive each one of us has to pursue justice for those who are marginalized. We have been fortunate to partner with a coalition of incredible advocates and community members and have found creative ways to leverage this movement forward together,” Dulce shared.

The fight is far from over, however. Amidst the ongoing fight against COVID-19, The Children of Smithfield are continuing to call for critical and still-missing protections for essential workers, including 6-foot distancing, adequate face masks, effective screening and quarantine, transparent information, and paid sick leave to care for themselves and their families.

Yet it’s clear they have left an indelible mark on communities all across Nebraska in their pursuit of a better, more dignified future for workers. “Children of Smithfield leaders are a voice for what it means to be a community in Nebraska, what it means to stand up together and for one another. We honor their voice for a better future with safe and dignified work,” Darcy said.

The issues facing meatpacking workers and their families have been with us for years, and there is a long way to go to ensure safe working conditions, requiring action and attention by us all. But new young leaders who will guide us along that journey are here, and they are The Children of Smithfield.

They’re like Maira Mendez, whose speech earlier this spring at the State Capitol ended with the heart of their mission: “We will continue to advocate and raise awareness on injustice towards plant workers, but we can’t do it alone. Solidarity is how change happens. Remember: tu lucha es mi lucha. Your struggle is my struggle.”

To learn more about The Children of Smithfield and their work advocating for meatpacking workers and their families, visit their Facebook page here.