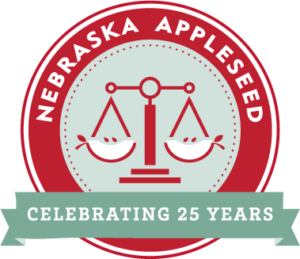 Today, Nebraska Appleseed celebrates its 25th anniversary of fighting for justice and opportunity for all Nebraskans.

“Nebraska Appleseed has pursued our vision of an equitable Nebraska with strong, welcoming, and diverse communities by tackling problems at their roots through litigating tough cases, building deep and meaningful relationships in diverse communities across the state, and fighting for policies at the state legislature and Congress to make Nebraska a better place for all.”

“By lifting up the voices of all Nebraskans, Appleseed’s advocacy at the federal, state, and local levels ensures that our elected leaders hear and understand the impact of laws and policies on the lives of everyday Nebraskans,” said Catherine Wilson, President of Nebraska Appleseed’s Board of Directors. “The Board is proud of this critical work, excited to celebrate this important milestone, and energized by what lies ahead in the fight for justice and opportunity for all Nebraskans.”

Appleseed will celebrate its anniversary by publishing reflections from partners and community members on shared successes and their experiences in working with Appleseed over the years. Moreover, starting in April, Appleseed will launch a 25 Days of Action campaign to engage supporters in continuing to create deep and lasting change for all Nebraskans.

Founded in 1996, Nebraska Appleseed is a nonprofit, legal advocacy organization dedicated to fighting for justice and opportunity for all. Appleseed has grown from a small group of part-time employees to a staff of more than 37 attorneys, policy experts, organizers, and advocates who use a systemic approach to face Nebraska’s biggest issues – such as child welfare, immigration policy, affordable healthcare, housing, and poverty.

Here are just a few of Appleseed’s accomplishments over the last 25 years: