Human Rights Watch interviewed workers in six states, including workers from five communities in Nebraska, who described serious job-related injuries or illnesses, and nearly all the interviewed workers identified production speed as the factor that made their job dangerous. 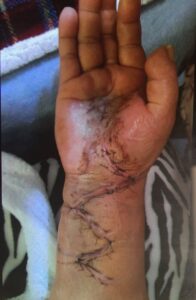 The injured arm of a Nebraska pork processing worker. Photo used with permission of worker.

“We’ve already gone from the line of exhaustion to the line of pain,” said Ignacio Davalos, a worker at a Nebraska plant. “When we’re dead and buried, our bones will keep hurting.”

“For more than a decade, Nebraska Appleseed and Heartland Workers Center have seen the devastating impact of inhumane work speeds and production pressures on individuals, families, and Nebraska communities,” said Darcy Tromanhauser, Director of Nebraska Appleseed’s Immigrants & Communities Program. “Permanently crippling pain and alarming injury rates continue to be the norm, even after more than ten years of research to document the problem and workers’ efforts to propose solutions. New federal proposals to decrease oversight of worker safety and public food safety are unacceptable.”

“It should not be too much for workers to expect to go home safe after a day of hard work, but how many more Nebraskans have to have their lives irreparably changed because of unsafe conditions in industries of utmost importance in our state?” asked Sergio Sosa, Executive Director of the Heartland Workers Center. “The injuries, illnesses, and issues found in this report happened 15, 20, 30 years ago. Why do we continue to build a food industry based on unsafe work practices for thousands of working Nebraskans? Doing so is deeply shortsighted and cannot continue.”

Meat and poultry workers make more than 20,000 forceful motions per shift on the low end, up to as many as 100,000 motions per shift. These non-stop cutting, pulling, grabbing, twisting, and lifting motions result in debilitating injuries to arms, wrists, shoulders, necks, and backs.

For nearly 20 years, Nebraska Appleseed, Heartland Workers Center, and Nebraska workers have worked with local and national partners to demonstrate the dangers in hog, cattle, and chicken processing plants and improve workers’ safety. These testimonials have been collected during years of Nebraska community meetings, forums, and worker surveys. More than a decade of academic, medical, and government findings show that these plants are some of the country’s most dangerous workplaces.

Appleseed documented unacceptable injury rates and conditions in Nebraska’s meatpacking industry in the 2009 report The Speed Kills You, as did studies in Alabama (Unsafe at These Speeds, 2013), Arkansas (Wages and Working Conditions in Arkansas Poultry Plants, 2016), by the Midwest Coalition for Human Rights (Always Working Beyond the Capacity of Our Bodies, 2012), by Oxfam (Lives on the Line: The Human Cost of Cheap Chicken, 2015, and No Relief: Denial of Bathroom Breaks in the Poultry Industry, 2016), by Human Rights Watch’s original report (Blood, Sweat, and Fear, 2005), and by numerous media investigations, including the NPR/Harvest Public Media series, Dangerous Jobs, Cheap Meat.