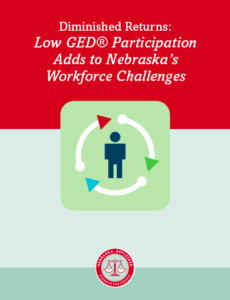 LINCOLN — Earning a high school diploma or its equivalent is more important than ever to ensure personal and professional success. However, nine percent of Nebraskans aged 18-64, which translates to over 100,000 people, are without a diploma or a high school equivalent. At the same time there is a persistent “skills gap,” or not enough workers with the right education or skills to fill open positions in our state.

“Over the course of 10 months, we looked at available data and spoke with students, instructors, providers and others in the high school equivalency system in Nebraska. What we found is major obstacles exist for students to complete the GED® and move ahead,” said Program Associate and report author Eric Savaiano. “The GED® is the only option for students in Nebraska, and the number of students completing it have significantly lagged in recent years. It’s time to reexamine how we are supporting Nebraskans as they pursue additional education to get a better job.”

The report recommends several ways Nebraska can improve access to and completion of high school equivalency:

← United communities where everyone has the safety and opportunity to pursue their dreams
$50K in 5 Days: We start today! →