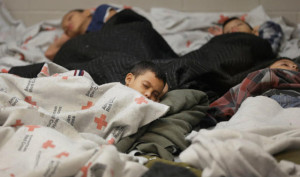 Many families – including mothers with children – are being held in prison-like facilities after fleeing threats of violence in their home countries.

People who come to the United States seeking safety from violence should not be treated as criminals. But, many people seeking asylum – including women with their young children – are being held in for-profit, jail-like facilities surrounded by walls that separate them from both safety and human dignity.

On September 1, Nebraska faith and community leaders gathered in Omaha for “Diapers In Detention,” an event to call for Nebraska’s Members of Congress to end the inhumane practice of detaining mothers and children who who have escaped some of the most-violent countries in the world and seek safe homes in the U.S. 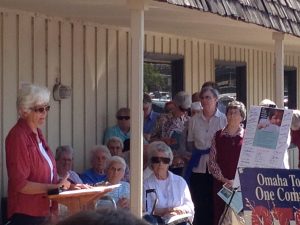 Sister Kathleen Erickson (far left) of Sisters of Mercy served as a chaplain at the detention facility in Dilley, Texas.

Sister Kathleen Erickson, a member of Sisters of Mercy who served two months as a chaplain the Dilley, Texas, facility, spoke to the crowd in Omaha about the experiences of the families being detained.

“Imagine spending a month or so in an arduous search for safety in a new country as an infant or small child, and then being held in a situation of great stress and uncertainty with your mother,” Sister Erickson said, “The name for these centers gives the appearance that they are haven for the families. In reality, the families are not free. Fences, constant supervision and restrictions keep these families from leaving.”

Omaha attorney Dan Rock, who has tried to help families detained at the Dilley facility secure their release, said being detained in jail-like facilities impose more trauma on families who already have escaped extreme danger both in their home countries and on the long journey to the U.S.

“The women tell of being beaten, robbed, raped and their family members murdered,” Rock said. “If there is not a man in the household, they are fair game to gangs who are uncontrolled by any government or police force.”

The most important way to use your voice right now is to call or email Nebraska’s U.S. Senators and your U.S. Representatives today!

Urge them to treat mothers and children seeking safety with dignity and respect, not lock them up like criminals.