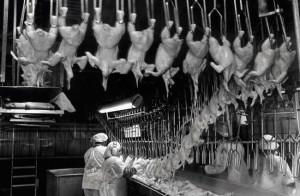 Earlier this month, the National Institute for Occupational Safety and Health (NIOSH) released a study of a Maryland poultry plant which found that 34 percent of workers had carpal tunnel syndrome while an alarming 76 percent exhibited signs of nerve damage.

As NIOSH noted in a blog post accompanying the release of its report, more than half of the positions examined require workers to make repetitive motions using force that went beyond what experts recommend is safe.

Large numbers of repetitive motions, dangerously fast line speeds, and high levels of force are all factors that lead to severe and crippling musculoskeletal injuries, such as carpal tunnel syndrome. And of the nearly 60 percent of workers who reported having pain and other symptoms of a musculoskeletal disorder, more than half of those stated that the pain so severe it kept them from sleeping.

This troubling report comes relatively soon after NIOSH published its findings last year of a poultry plant in South Carolina, which had very similar issues with workplace safety. In that plant, 42 percent of poultry workers had carpal tunnel syndrome.

The Occupational Safety and Health Administration (OSHA) even agrees these work speeds lead to high rates of injuries, but OSHA claims it doesn’t have the resources to set and enforce rules that could protect workers.

However, as this NIOSH study adds to the ever-growing list of medical studies and worker testimonials that link work speed to crippling injuries, it’s more clear than ever this is a problem that is not going away. We have an urgent need for meaningful federal work speed protections in meatpacking and poultry plants, and we need them now.