2019 Roots of Justice honoree: Omaha Together One Community

Roots of Justice Award: Omaha Together One Community

On October 10, Nebraska Appleseed is celebrating the outstanding contributions of individuals and organizations who have stood up for justice and opportunity for all during the 2019 Good Apple Awards. We are proud to introduce you to the honorees we are recognizing this year. 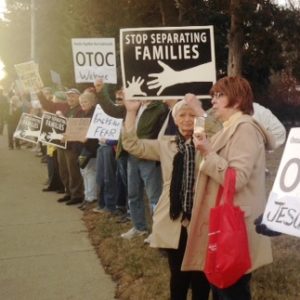 OTOC at an immigration rally

For years, from coffee shops and living rooms to churches and the state Legislature, Omaha Together One Community (OTOC) has brought together our communities along the same lines that often divide us, and in the process, OTOC has become an integral agent for change, enriching the lives of often distant neighbors and helping shape a more compassionate, diverse, and vibrant Nebraska for everyone.

Consisting of over 20 congregations and community organizations in the Omaha metro area and fueled by a dedicated staff and extensive network of volunteers, OTOC organizes its work across a number of action teams focusing on housing, immigration and refugees, environmental sustainability, mental health, and Medicaid expansion.

These collaborative groups believe that solutions for the community must come from the community, and for OTOC, this is only made possible by investing in people and relationships, and providing ladders of opportunity for those seeking to engage in meaningful ways with our communities through leadership development, public discourse, and collective action.

“They take the time to do the longer term work, and have invested the time to organize and facilitate volunteers,” said Darcy Tromanhauser, Appleseed’s director of Immigrants & Communities. OTOC has brought a diverse set of community and faith leaders to the table and into these action teams to advocate on a number of issues, propelling them forward by striking the key balance between leadership training and opportunity to create spaces for important conversations to happen.

“OTOC has a community-first focus. They know and understand the various community needs and interests, and do everything they can to be responsive. They have made a huge difference in our communities,” said James Goddard, Appleseed’s director of Economic Justice.

It’s this spirit of community investment that spurs OTOC’s work and inspires their members and volunteers to continually advance their mission.

“Through OTOC, I can act for social and economic justice with a group of people who have gained the respect of public officials. We come from a variety of faith traditions to build relationships and improve the common good for everyone. This unity of purpose brings us together,” said Vicki Pratt, a member of OTOC’s Payday Lending Action Team. 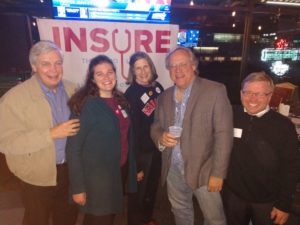 The organization provides organizer trainings, hosts issue cafes and candidate forums, and provides community members with the tools and encouragement to contact their elected officials on a number of different issues, even when progress stalls or change seems slow – like Medicaid expansion, an issue OTOC and Appleseed found common ground and a common call to action.

“Members of OTOC are always willing to fight for social justice – to use their time, resources, and expertise to move things forward. They collected so many signatures for Medicaid expansion! They are always willing to do what needs done, fighting on issues that feel at times like a never-ending uphill battle,” said Molly McCleery, Appleseed’s director of Health Care Access.

In addition to Medicaid expansion, OTOC and Appleseed found a strong alliance in the fight for immigration reform. OTOC has been a persistent voice in lifting up common sense policies that allow for Nebraskans to pursue their dreams and for families, including those with Temporary Protected Status (TPS) to stay together. “They take time to work on longer-term issues,” said Darcy. “I have such respect for their core leaders on working to keep families together.”

For their dedication to building a stronger community through citizen leadership, thoughtful conversations, and meaningful relationships, Nebraska Appleseed is honored to recognize OTOC with this year’s Roots of Justice Award!

Join us in celebrating OTOC at the 2019 Good Apple Awards on October 10th. For more information, contact Edgar Reynaga at ereynaga@neappleseed.org.