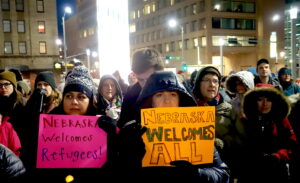 300 Nebraskans attended “Light The Future” vigil in support of immigrants and refugees on January 12, 2017 in Lincoln.

We have seen national outcry since the Trump Administration announced earlier this month that it would cut refugee admissions next year from an already-low 45,000 to 30,000. It is the lowest ceiling on refugee admissions in the nearly 40 years since the U.S. Refugee Admissions Program began.

“This country has always been a place where the persecuted, the downtrodden, and those who had nowhere else to turn, found a safe harbor. New Americans bring their determination, creativity, and innovation to our country, and we must continue to value the contributions of all immigrants if we want to thrive as a nation. To turn our back on this promise now, at a moment when the refugee crisis is at its worst, is an abdication of one of this nation’s most fundamental principles.” – We Are All America

“Members of the Interfaith Immigration Coalition and the broader faith community expressed their dismay and outrage in failing to welcome the world’s most vulnerable people. Six of the nine refugee resettlement agencies are faith-based and all work with communities of faith, underscoring the deep moral conviction to welcome the stranger and advocate for the vulnerable….Faith leaders from many different traditions urge the administration to reverse course. Communities of faith call on the administration to restore a robust refugee admissions goal of at least 75,000 in FY 2019 and urge Congress to decry an immoral admissions goal of only 30,000 refugees and weigh in with the administration directly.” – Interfaith Immigration Coalition

Nebraska has a proud history of refugee resettlement and welcoming Vietnamese, Burmese, Syrian, Somali, and Sudanese communities, among others. In 2017, the Nebraska Legislature passed LR 27 which reaffirmed the long-standing contributions of refugees to Nebraska and supported our continued success in refugee resettlement.

For instance, refugee entrepreneurs developed a robust local grocery market and other businesses in Lincoln, which strengthen our community and local economy. National studies confirm these positive outcomes. We recognize the importance of offering safe harbor and renewed opportunities to persecuted people around the world, and at the same time, Nebraska welcomes the unique economic vitality and diversity that refugees bring to the United States.

2 Replies to “Refugees Welcome in Nebraska”