Take Action – We must stand with DREAMers now 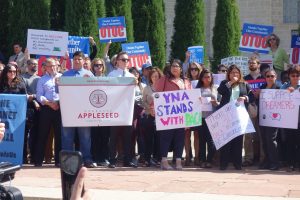 On September 5, the Trump Administration announced that over the next six months it will end the successful Deferred Action for Childhood Arrivals (DACA) program that has allowed Nebraska to benefit from skills, talents, passions, and energy of over 3,000 hard-working young people.

We know Nebraskans stand with DREAMers. We saw it today when nearly 500 of you stood in support of these young Nebraskans – our friends, neighbors and classmates – at a press conference outside the State Capitol.

Now is a time for Congress to hear your support. Will you fight with us to protect Nebraska’s DREAMers, keep families united, and help strengthen our state’s future?

This bill will provide DACA recipients and other similar hard-working young Nebraskans who were brought to the U.S. as children with the certainty of legal status, and eventually, a way to earn U.S. citizenship.

Congress is long overdue to open up a path to citizenship for young people who only know our country as home and want to work to make our nation stronger. Dreamers are capable, talented, and resourceful. They’re exactly the kind of young people Nebraska needs to help us build the future we all want.

But unless Congress acts now, we lose out on all they have to offer.

Call our U.S. Senators and your U.S. Representative today. Tell them they must protect DREAMers by passing the “Dream Act of 2017,” so we can allow these amazing, brave young people to have a path to citizenship and keep making our communities stronger.

4 Replies to “Take Action – We must stand with DREAMers now”