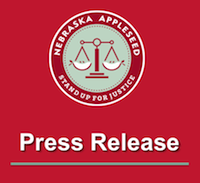 LINCOLN — Thursday night, a crowd of nearly 300 people withstood frigid temperatures to gather in Lincoln’s Tower Square for a peaceful, candlelight vigil in a showing of strong and united support for Nebraska immigrants, refugees, and their families.

The “Light The Future” vigil, co-sponsored by more than a dozen local community organizations and leaders, was a powerful demonstration that Nebraskans value our immigrant and refugee neighbors, whose families contribute so much to the state, and that Nebraskans recognize our communities are stronger when everyone has an opportunity to belong.

Joseline Reyna, a UNL student and DACA recipient who hopes to attend law school, told the crowd immigrants and refugees continue to work hard to better their home communities and contribute to Nebraska while navigating the uncertainty many families are feeling about what’s next for U.S. immigration policy.

“If you walk away with something today, I want you to remember that we have worked so hard and overcome so many obstacles,” Reyna said. “That things that are mentioned that put our lives and the ones around us in danger, are scary. That we are real people, and that if the President does get rid of DACA this will affect people, students like me who have given so much to this country.”

“Refugees need a safe home, and they need friends. It is my human, civic, and religious duty  to help them find both,” said Rabbi Craig Lewis of Lincoln’s South Street Temple, another one of the vigil’s speakers.

Local immigrant and refugees speaking at the vigil reminded the audience how welcoming new Nebraskans into safe homes has saved lives and enriched Nebraska communities. And a collection of speakers from diverse faith backgrounds illustrated that values of kindness, dignity, and humanity for all are united throughout all religious faiths.

Seth Mock of Lincoln, a refugee from South Sudan

The vigil came two days after a diverse collection of nearly 70 Nebraska leaders and organizations sent a letter to members of Congress urging them to support policies that allow immigrant families to continue to enrich Nebraska. Companion vigils to stand with immigrants and refugees also were held Thursday night in Omaha and Grand Island.