Nebraska Appleseed is thrilled to honor a truly phenomenal young Nebraska leader with this year’s Milo Mumgaard Emerging Leader award at the 2016 Good Apple Awards on October 13 in Omaha. Alejandra Ayotitla Cortez has already impacted the lives of hundreds of Nebraskans through her dedication to community and building the leadership of those around her.

Currently a senior at University of Nebraska – Lincoln, Alejandra has always contributed to the community in numerous ways while pursuing her studies. She is a straight-A student, coordinator of the GED and Citizenship Tutoring program at El Centro de las Americas, beloved daughter, and tireless advocate.

Buy your tickets today and see Alejandra honored at the Good Apple Awards! 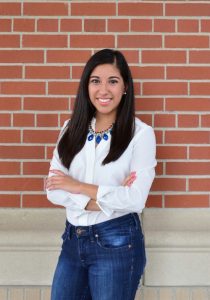 On a warm day this past April, Alejandra Ayotitla Cortez got a phone call.

It was a busy week. Alejandra had been studying a tests the night before, balancing her course load with determined efficiency. The week had been marked with rushed interruptions: she was getting ready to leave the country for a study abroad program in only a few weeks.

And now this call: Alejandra was needed for an emergency press conference at the Nebraska State Capitol.

“She was willing to jump in at a moment’s notice,” recalls Darcy Tromanhauser, Director of Nebraska Appleseed’s Immigrants & Communities Program, “to stand up, step out in front of the microphones, and help explain why this is important to Nebraska.”

The press conference was on the 2016 bill that ensured DACA youth and other work-authorized immigrants could obtain professional licenses and contribute their skills to Nebraska. Alejandra had been working with Appleseed and DREAMer students to lift up their stories as examples, and was in a unique position to be a voice for the benefits of the bill.

Gloria Sarmiento, Immigrants & Communities Community Organizer, remembers meeting Alejandra when her parents were taking the GED. “The family came together with mom and dad to study,” says Gloria. “Alejandra was helping the GED students, she was in high school, and now she coordinates the program.”

Composure, strength, and “positive, bright, quiet energy” follow the 21-year-old into every room, says Darcy. “In a really unassuming, a leadership-from-behind kind of way. She’s not out there promoting herself, she’s always out there promoting other people.”

Alejandra, originally from Hidalgo, Mexico, immigrated to Nebraska when she was nine years old. Her parents always supported Alejandra in her work, whether academic or advocacy focused. She passes that encouragement and support on to others.

“She’s always thinking about others, and how she can contribute to her community. How she can help bring along the next person in participating in public life. Telling their story. Taking action,” Tromanhauser explains. “You can see other leaders come up in her path because she’s helping them along.”

Alejandra will graduate from UNL with a B.A. in Psychology with minors in Political Science and Spanish in spring of 2017. After working with Appleseed and other partners on common-sense federal immigration laws in 2013, Driver’s Licenses for DACA youth in 2015, and most recently Professional Licenses for DACA youth in 2016, she has expressed her desire to continue to work to change lives through public service. “She wants to continue helping people in the community,” Sarmiento said. ”You are going to see Alejandra fighting for everything that she thinks she has to fight for.”

The 2016 recipient of Nebraska Appleseed’s Milo Mumgaard Emerging Leader Award undoubtedly has a bright future ahead of her, but the difference she has made in her community is already one that will last.

An extraordinary example of collaborative leadership, Alejandra has changed Nebraska and made our communities stronger by the stories she has helped tell and the people she has inspired to get involved. Nebraska wouldn’t be what it is today without her, and Appleseed can’t wait to see what comes next for this incredible young leader.