This is a post written by Appleseed intern Angela Ching. 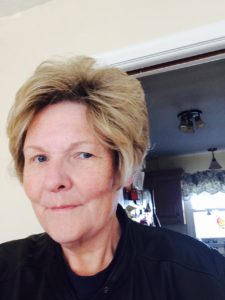 After retirement, Miriam has become a dedicated volunteer fighting for all Nebraskans to be able to get affordable healthcare access.

Miriam Chapman is retired, but that doesn’t mean she’s done working. Dressed in a flowing blue blouse that looks like the sea, Miriam explains how she firmly believes every moment has a purpose.

Karen Free, one of Miriam’s closest friends, spent her life working with nonprofit organizations. However, Karen couldn’t find a stable job, and worked three jobs without benefits. She knew she was sick but didn’t see a doctor because she couldn’t afford health insurance. In the spring of 2013, Karen was diagnosed with Stage 4 renal cell carcinoma and died six weeks later.

“She wasn’t a slouch,” Miriam said of her friend. “She was a hard-working person, and I see her as representative of so many people in Nebraska. I’d known her for 30 years, but the circumstances of her life put her in an unfortunate position. It made me really see firsthand how people can be reduced to such hopelessness.”

Most of Miriam’s volunteer work involves advocating for Medicaid expansion and combating poverty. She now works with her church’s Poverty Education and Advocacy Team. She heard about the Insure the Good Life campaign’s Balloon Delivery to State Senators to advocate for Medicaid expansion during the last session, and helped organize a letter writing effort at her church. She also attended the floor debate with Appleseed for LB 1032, the bill to expand Medicaid this past legislative session, which did not advance.

“I was so angry that day when I came home, I dug up my whole garden and replanted it,” Miriam said. Gardening is now one of her favorite past times, and she even grows her own pesticide-free food. And even though the fight for Medicaid expansion ended in disappointment this year, Miriam says the key is persistence. “As I look through history, every significant change has come in steps. The thing is just to keep going back and persisting and not giving up.”

The effect of Miriam’s work is evident in multiple organizations and causes. She works with Youth Emergency Services, which provides resources and food for homeless youth in Omaha.

Once a month at her church, people donate money and cook food for approximately 100 people. Her volunteer work is extensive and relentless. With a smile on her face, she explained her stamina in her advocacy work:

“That’s the nice thing about being in retirement. You’ve lived through so much nonsense that you wanna raise a little hell!”

When things get tough, she has her grandchildren. “They’re so fresh and unspoiled by the world. They remind us of the good things in life.”

Miriam has incredible drive that matches the size of her heart, and she shows no sign of slowing down. “You can change the world, you can do something positive. That’s why I volunteer–to be involved in something that makes the world a better place.”