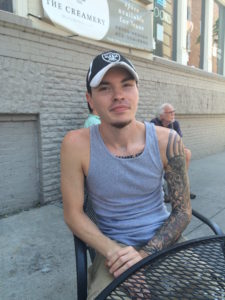 Before Sloan Rupp became a volunteer with Nebraska Appleseed, he grew up in a single-parent household. His father struggled with complications from diabetes and had trouble getting health insurance to afford his medications. Once Sloan went back to school after serving in the U.S. military, he felt like he was just spinning his wheels — he wanted to find a way to contribute to the community. His father’s battle to obtain adequate health care led Sloan to Appleseed’s Insure the Good Life campaign.

Sloan attended rallies at the State Capitol and sat in on Legislative floor debates, making an array of value contributions through Appleseed’s volunteer program. But, he said he enjoys phone banking the most: “Talking with people around Nebraska and getting their side, how they see things, and hearing what they’re going through–That was the most rewarding.”

“(Vargas’s) story interests me,” Sloan said. “He’s been in this country almost his whole life, a published journalist, a Pulitzer Prize winner, and he still can’t get citizenship.” This led Sloan to join the University of Nebraska-Lincoln’s chapter of Define American, where he continues to advocate for immigrant rights on UNL’s campus alongside other students.

“I think people stand off and judge people from afar, rather than actually talking to them and understanding,” Sloan said. “I wish people would push their biases aside and listen to their stories more. There are so many misconceptions about undocumented immigrants.”

Before attending school in Nebraska, Sloan served in the U.S. Army and was deployed to Iraq. He says his proudest accomplishment is “going to Iraq and bringing all my soldiers home. I was combat team leader, and all of my brothers got to come home and see their families again.”

Sloan’s experience in the military inspired his plans for the future. As a senior psychology major, he hopes to set up a work-study with the Vet Center so that he can begin a career providing counseling to combat veterans. He stated, “If I become a counselor later and start my own business, I’ll probably go the non-profit route,” which is why he’s considering the possibility of interning with Appleseed as a way to learn the ins and outs of running a non-profit organization.

With an extensive background in volunteer work, Sloan’s future in continuing his work in the community is bright. When asked what motivates him, he said, “Nowadays, we’re so concerned with money. If we do something, we expect something in return right away. But I just enjoy helping people.

“The power really lies in the people. We can sit back and let other people do things, but if we actually stand up for ourselves and other people, then we have a voice.”