A week of overwhelming support for Syrian refugees in Nebraska 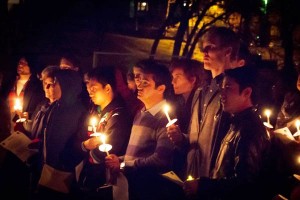 In recent weeks, a national conversation was sparked around refugees from Syria. Nebraska has long been a safe and welcoming home for those escaping violence throughout the world, and on November 17, Nebraska Appleseed issued a statement urging our elected leaders to welcome refugees in keeping with our state’s values of compassion and humanity.

In the week before the Thanksgiving holiday, it was both encouraging and humbling to see that sentiment reflected by many hundreds of Nebraskans, who showed their strong support for welcoming Syrian refugees in Nebraska.

More than 700 Nebraskans gathered for candlelight vigils for refugees in Lincoln and Omaha on Monday night. The Great Plains Conference of the United Methodist Church announced 35 congregations in Nebraska and Kansas ready to welcome Syrian families. And 31 Nebraska organizations delivered a letter to Governor Ricketts urging him to change his request to the federal government to halt resettlement of Syrian refugees in the state.

Many of you have asked how to get involved to support Nebraska remaining a safe home for refugees seeking safety. You can sign up on our Take Action page to stay informed about the next steps to make a difference on this issue.

For more videos from the vigil, visit Appleseed’s Vimeo page.

Lincoln Journal Star: A refugee who loves Nebraska, ashamed of its leader

Omaha World Herald: Syrians in Nebraska plead: Don’t turn your back on refugees