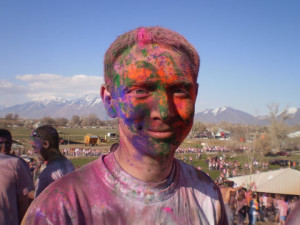 Immigrants & Communities intern Chuck Smart is putting his talents and passion to work at Nebraska Appleseed.

Though Chuck is in his second year at the University of Nebraska-Lincoln College of Law, he calls Twin Falls, Idaho, his hometown. Before coming to Lincoln, he attended Utah Valley University in Orem, Utah, where he studied legal studies.

When asked about where his passions for justice stem from, Chuck immediately responds, “I lived in the Philippines for two years and was introduced to the struggles that many go through in order to emigrate to the U.S. and other countries.”

When not working tirelessly to help other people, he likes to take his kids to unparalleled attractions in Lincoln (Note: We were confused why he would want to take his children to perpendicular attractions as well), taking long walks with his wife (Note: Capitol Beach is lovely this time of the year), watching movies and preferring the book counterparts instead, and skiing.

In the future, he hopes to use his law degree to “champion legal causes for those whose needs and struggles seem to not be noticed.” Chuck also notes that he watches the new Star Wars trailer weekly and plans to camp outside the movie theater for days in order to see the new movie.