Hunger data shows slight improvement, but too many Nebraskans still struggle to eat

LINCOLN — New data released Thursday from the Food Research and Action Center (FRAC) shows the number of Nebraska families facing food hardship in the first half of 2015 has not declined significantly from last year. 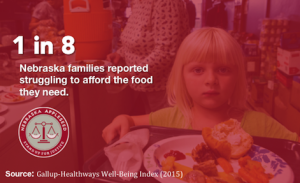 The report, “First Half of 2015 Food Hardship Rate by State,” indicates 11.8 percent of Nebraska families (1 in 8) say there have been times this year when they have struggled to afford the food their family needed. This is a slight decline from the 12.7 percent of families who self-identified as facing food hardship in 2014, but still within the margin of error in a survey conducted by the Gallup-Healthways Well-Being Index.

Nebraska’s food hardship data largely mirrors the national trend. According to FRAC, 15.8 percent of survey respondents in the first half of 2015 answered “yes” to struggling to afford necessary food. This is a drop from the 17.1 percent who replied “yes” in 2014. Only 12 states reported a statistically significant drop in food hardship. Other states either were within the margin of error or did not have a large enough sample size of respondents to make a determination.

Nebraska Appleseed Economic Justice Director James Goddard said that while this data does not show rates food hardship are growing in our state, more must still be done to ensure all Nebraska families can get the meals they need.

“While the data released today is encouraging, too many Nebraska families still struggle to put food on the table,” Goddard said. “There are policies we can strengthen to cut this food hardship rate even lower. Our state must stop the harmful cliff effect that prevents families from accepting a better job with slightly higher wages because they would lose all of their food assistance. We also encourage the Nebraska Department of Education to provide clear guidance to eligible school districts on the implementation of the Community Eligibility Provision, which would let some Nebraska schools receive funding to provide meals to all of their students.”

These survey results come at a key time for federal nutrition policies. This fall, federal child nutrition programs—such as school breakfast, school lunch, afterschool meals and summer meals — are set for reauthorization by Congress. Other safety net programs from SNAP to low-income tax credits to Social Security Disability Insurance to Medicaid have been targeted for cuts in the federal budget process.

“It’s imperative that Congress keep these programs strong,” Goddard said, “because they are proven tools that allow our working families with low incomes to put food on the table, seek medical care, and work to get ahead.”