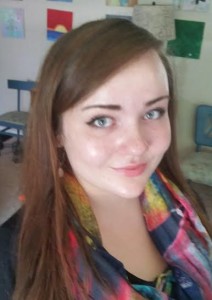 Immigrants & Communities, Administration, and Jane-of-all-trades intern Olivia Rask is starting off her fight for justice early and in a forceful way.

She is a Lincoln native and currently attends Lincoln High School. But, the fact that she is still in high school hasn’t stopped her from passionately fighting for justice on any front she can. “I was a member of Illusion Theater Project T.R.U.S.T. for two years, which is a performance troupe that teaches students about social issues,” she says, “I have been a part of the LHS Feminists for Change club for two years and now I am the president of the club.”

And now Olivia is taking her passion for social justice to Nebraska Appleseed. Hearing about Appleseed through a friend of hers, she was immediately taken by our organization. “After hearing about it from my friend, I went over the website and Facebook page was immediately extremely interested,” she says, “I love that Appleseed is dealing with this awfully vast, deeply-rooted problem with practicability and tangibility. They are approaching social justice through law and social outreach so that it absolutely affects the lives of those it needs to. That’s what I wanted to be a part of.”

Olivia says that her future plans include studying political science in college, and then she plans on attending law school. When she is not staunchly advocating for justice, she is active in the Girl Scouts of America program as well as a junior Roller Derby girl. And when Olivia finally takes a breath, she likes to read, paint, or take walks. We reached out to Olivia to she if she actually has free time, but she said she was too busy to comment.

She also believes that Samwise Gamgee is the true ringbearer, and that Frodo is a hack.