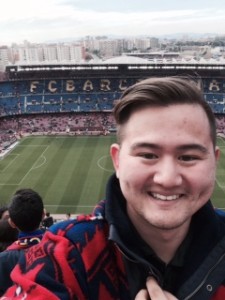 John Beutler is a Creighton law student from Omaha and a law clerk in Appleseed’s Economic Justice program.

Economic Justice law clerk John Beutler is a critical advocate for justice, both on and off the sand volleyball court.

Born and raised in Omaha, John had been an Omahan for life when he decided to further his education at Creighton University, where he graduated with a degree in Economics. He then decided to keep a good thing going and now is pursuing his law degree at Creighton’s School of Law.

Outside of his studies, John stays busy. He is a volunteer GED math teacher at the Omaha Literacy Center, an avid Creighton basketball fan (for better or for worse), and is also a beer connoisseur. In his free time, he enjoys outdoor activities such as soccer, tailgating and the intramural sand volleyball powerhouse that is Nebraska Appleseed. He also claims that he once wore the same pair of shoes every day for a year straight. He purports to be a good cook, but admits that he is a better eater.

Though, as an avid fan of the hit show, Game of Thrones, he understands why beacons are so important: John knows that the night is dark and full of terrors. But, he can often be found roaming the office whispering, “The North remembers.”

← Making Normalcy a Reality for Nebraska Youth in Foster Care
Medicaid at 50: A day worth celebrating →