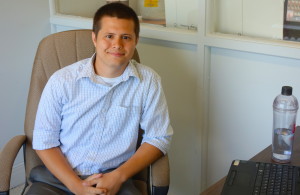 Law clerk David Pontier is a University of Nebraska College of Law student from Omaha.

Most people decide right after their undergraduate career if they want to pursue a law degree, but for Appleseed’s Immigrants & Communities Law Clerk David Pontier, this wasn’t the case.

“After teaching high school English and coaching baseball in the small rural community of McCool Junction, Neb. since 2012, I made the tough decision to leave teaching and pursue a Juris Doctor at the University of Nebraska,” David said. Graduating from the University of Nebraska-Omaha, David has a degree in Secondary Education-Language Arts. But now he has decided to change course to study law and use his talents this summer to help Appleseed stand up for justice.

“Nebraska Appleseed’s mission and programs are aimed at helping vulnerable, disadvantaged, and sometimes-forgotten Nebraskans, who struggle to work hard to better their lives and the lives of their families just like everyone else,” he says, “Growing up in disadvantaged sections of Omaha, I’ve witnessed the cyclical effects of poverty on family and friends, and I have dedicated my professional endeavors to serve these communities to the best of my abilities.”

David says that his immediate plan is to graduate law school and practice law in Nebraska. He is also a member of the Multi-Cultural Legal Society, Student Bar Association, and Phi Alpha Delta. In his free time, he enjoys spending his time spotting storms (which he is certified to do), playing in a York/Geneva-based band, “Home by 10”, and partaking in the glory that is Appleseed Sand Volleyball (Editor note: We literally have never seen David play on ‘Motion To Spike.’ Sounds like he’s riding our coattails.)

David is also a fan of Star Wars, and the mere thought of watching the opening sequence roll across the screen has been known to bring a tear to his eye.