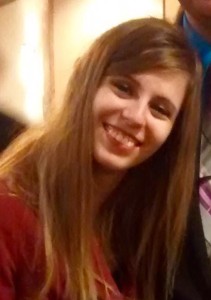 Immigrants & Communities intern Ashley Kunz is a Lincoln native and a student at Doane College.

Immigrants & Communities intern Ashley Kunz has begun the long trek to law school, and hopes that Nebraska Appleseed will be a positive experience for her as well as prepare her for to become an attorney.

A native of Lincoln, Ashley now studies political science and pre-law at Doane College, and envisions herself at the law program at the University of Nebraska-Lincoln in the near future. In addition to her constant studying, Ashley has also participated on Doane’s speech team for the past three years. To put the time commitment in perspective for speech, she competed in six events this past year versus the average 2-3 events.

When not working towards social justice; Ashley works at Lincoln pet shop The Fish Store, spends time with her two dogs, plays video games, or enjoys Jojo’s Bizarre Adventure. (Note: after attempting to find out exactly what makes Jojo’s adventure so bizarre, this writer can confirm that Jojo is currently involved in a bizarre adventure.)