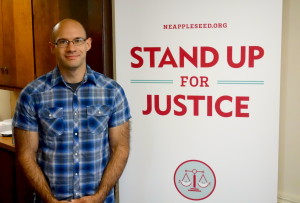 Kevin Dunn, an intern in Nebraska Appleseed’s Child Welfare program, has come to Appleseed after a long journey. Starting in beautiful Axtell, Neb., Kevin then served in the U.S. Army in Iraq. Now, he has come to Appleseed to see if this is what his future could look like: ”I was simultaneously interested in nonprofit work and law, so Appleseed was a perfect fit to find out more about both.”

Kevin believes that serving in the Army was a good decision on his part, providing him with discipline and instilling a desire to serve others. “I was 17 and didn’t know what I wanted to do with my life and college seemed out of reach,” he says, “I am still glad I did it and think it has made me the disciplined person I am today.” Transitioning to social work has been an initial challenge because it isn’t as physical, “Though I get to use my brain instead of just picking things up and moving them around like I did in other jobs.”

However, Kevin admits that his future is wide open and has, “thought about grad school and going back in the Army, I guess only time will tell.” And his time is now. He is a senior Philosophy and Political Science major with Religious Studies and National Securities minors at the University of Nebraska – Lincoln with the world at his fingertips.

Kevin also participated in Model United Nations through UNL last year and was able to go to New York, hoping that it won’t be the last time he goes. He also enjoys playing the guitar, but doesn’t believe that he will be the next Jimi Hendrix. One thing we do know is that Kevin isn’t Dunn yet trying to improve the lives of his fellow Nebraskans.

← STATEMENT – Supreme Court ruling ensures health coverage for 57,000 Nebraskans
Changes to the Bridge to Independence Act – What do they mean for you? →