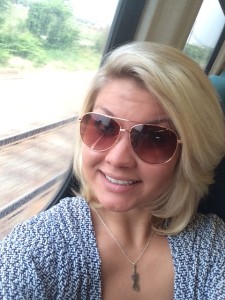 Samantha Swinarski is a law clerk in Appleseed’s child welfare program. This is a selfie she took on a train.

Child Welfare law clerk Samantha Swiniarski is using her previous experience as a child welfare social worker and her passion for Nebraska Appleseed’s work to incite positive change in Nebraska.

“I’m very passionate about child welfare reform from my past work experience and I get to witness the difference Appleseed makes in the Nebraska child welfare system,” Samantha says, “I feel blessed to be here.”

Samantha was an “Omahan for life” until she trekked to beautiful northeast Nebraska to experience her undergraduate career at Wayne State College, earning a degree in Psychology, making her a “Nebraskan for life”. Currently studying at Creighton Law School, she working towards her law degree as well as a master’s in Alternative Dispute Resolution and Negotiation.

She heard about Appleseed through a friend, but when Appleseed conducted on-campus interviews at Creighton, she couldn’t pass up the opportunity. “I did some research and I absolutely loved this organization and was so lucky to get an interview and then a clerkship!”

Samantha’s future plans include practicing advocacy law in child welfare or elder law, but she says the thought of running for the Legislature is certainly a possibility.

Her free time is spent being a mentor with Big Brothers Big Sisters in Omaha, competing in triathlons, canoeing, being active in general, or traveling, “I even spent several months living in Naples, Italy and traveling around Europe. I have a strange obsession with one-room schoolhouses and I’m constantly looking for them on rural road trips.”

Samantha is also an avid fan of HBO’s “Game of Thrones” and can sometimes be heard yelling at her co-workers that “Jon Snow knows something! He has to know something!”