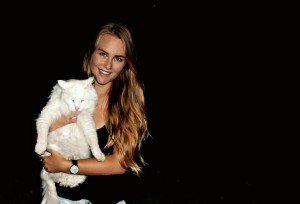 Immigrants & Communities intern Grace Kraus has seen firsthand the positive change Nebraska Appleseed fights for in Nebraska, and it led her to join the effort this summer.

“Appleseed stands for the right issues, and I have a lot of friends who were affected by (DREAMers driver’s license bill) LB 623, so seeing Appleseed have a huge impact with the bill sparked my interest,” she says.

Grace comes from Denton, Neb., and has also been exposed to different people and issues through her involvement Speech, Future Business Leaders of America, Youth in Governance, Grassroots Leadership Development Program, National Honor Society, Band, Journalism, and by serving on the Chamber of Commerce.

Through her involvement in Grassroots Leadership Development Program, she started formally working with Nebraska Appleseed, “Being involved with their welcoming project in Crete, and with encouragement from my counselor, an internship with Appleseed seemed like a solid way to spend my summer.”

On top of every other acronym she is involved with, Grace is studying International Business and Spanish at the University of Nebraska – Lincoln. The eclectic range of activities that she is involved with is also representative of her approach to the future. “Right now, I expect to go to law school, but my plans change a lot,” she said. “ I hope to live all over the place – I plan on my location changing a lot too. The goal job would be to be an Ambassador to another country… but that’s not entirely decided on either.”