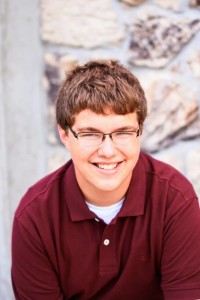 Appleseed communications intern Grady Wiedeman is utilizing the skills that he learned competing in speech and debate in real world situations. Hailing from beautiful Norfolk, NE, he is taking his talents to south Nebraska because he believes in Nebraska Appleseed.

“I think the work that we do is really important to ensuring a brighter future for Nebraska and I’m glad to be a part of it,” he said.

Learning of Appleseed through their drive to raise the minimum wage, he believes that this was one example of how, “we can fix [social inequality] in Nebraska and that truly resonates with me.” But, even though he is a bright-eyed freshman Political Science major at the University of Nebraska-Lincoln, he doesn’t believe that law school will be part of his future.

“I have considered teaching several times as well as nonprofit work in general,” Grady says. “I like to think that I am pretty open to whatever gets thrown my way in the future.” Some speculate that his future might include becoming a hermit in the mountains, though we can neither confirm nor deny this.

But don’t be confused, he isn’t a typical freshman college student. He is an Eagle scout and debates for the University of Nebraska-Lincoln as well as helping coach the Norfolk High School debate team. He also writes opinion columns for the Daily Nebraskan so that he can occasionally see the light of day.

He also enjoys, “taking long walks on beaches that I have never been to and occasionally camping.” In addition, he believes that Andύril, flame of the West, forged from the shards of Narsil, returning to the heir of Isildur is the best thing that could happen to Middle Earth and the race of man (he really likes Lord of the Rings). It is in this writer’s opinion that Grady Wiedeman is an exemplary individual and definitely deserves a pay raise. (Editor’s note: Grady will receive a 2.5% cost of living increase to his current salary of $0.)