Many individuals and families are forced to flee from their countries of origin because their lives are in danger  – including people seeking safety at the U.S. southern border. But for the past two years, families fleeing violence have been denied their right to seek safety and protection, and instead returned to danger under the guise of the ‘public health’ policy, Title 42. This has created a humanitarian issue that requires a prompt, moral and compassionate response from our representatives to end the harmful and discriminatory policy. (Read more about the direct threats of violence in Mexico and Central America: Children on the Run.)

Since March 2020, the Department of Homeland Security (DHS) has misguidedly used orders from the Center for Disease Control and Prevention (CDC), under Title 42 and in reference to the pandemic, to prevent people seeking safety from requesting asylum, and returning thousands to the persecution faced in their countries of origin. However, Title 42 has never had a clear connection to addressing the spread of COVID-19. Public health experts, including the New England Journal of Medicine and Columbia’s School of Public Health, have repeatedly stated that there is no public health justification for this policy. 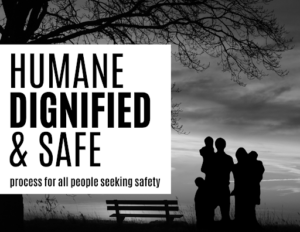 Federal health officials agree the policy is unnecessary and problematic. Last month, the CDC announced an anticipated end to Title 42 on May 23, 2022. However, some lawmakers continue to attempt to override health experts at the CDC and Biden administration by forcing a vote on legislation that would mandate the continuation of Title 42. In addition, a federal judge has blocked the Biden Administration’s attempt to end Title 42 and a lengthy legal battle is expected to follow. This response is devastating for people seeking safety, who have already faced grave harm and have remained in danger for over two years as a result of this policy.

When looking at the consequences of our outdated immigration policies like Title 42, we cannot ignore the disproportionate effects on Black immigrants, who are more often denied to seek safety and remain with family. In just the time Title 42 has been in place, over 25,000 Haitian migrants have been expelled and forced to return to the dangers from which they seek safety.

Everyone has the right to seek safety, no matter where they come from.

People and families fleeing violence should be welcome in our nation and communities. Exclusionary policies like Title 42 are the opposite of what is needed to ensure people’s right to seek safety. In order to better support these families we must:

The CDC’s decisions to revoke Title 42 should be upheld without any further threats or delay.

Lawmakers must end this discriminatory policy that opposes our values as a country and violates our legal commitment to refugees and aslyum seekers. We must move forward with compassion and dignity for people fleeing violence.

Want to learn more? Carne y Arena, a powerful virtual reality experience and exhibit of personal stories about the harrowing journey to seek safety, will be at KANEKO in Omaha through September 10.