Farm to School in Nebraska: Exploring the “Good Life”

This is a guest blog post by Libby Israel, Nebraska Appleseed’s Youth Ambassador for Food and Nutrition Access.

October is Farm to School Month! 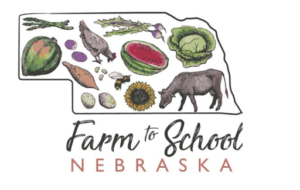 Photo of Farm to School Nebraska from NDE

Child nutrition has been at the core of our work and together with our communities, we fought against food insecurity. Farm to School has been a parallel part of that work. The Nebraska Appleseed-led Go Big Breakfast coalition is transitioning to a more holistic focus in light of the COVID-19 pandemic and we aim to incorporate Farm to School activities going forward.

Located in the heartland, Nebraska is rich with family farms, local producers, and fresh food. Over the last decade, Nebraska’s long-standing agriculture industry has helped to give the Farm to School movement momentum across the state.

What is Farm to School?

Farm to School programs focus on teaching children the importance of knowing where their food comes from and how to make healthy decisions. Students are invited to learn more about agriculture and nutrition through activities such as working in a school garden, farm tours, taste testing events and cooking demonstrations.

Farm to School also strives to connect and strengthen local producers and our communities by connecting locally sourced foods and nutrition with schools, early care and education sites. The program also works to promote equity and combat the health and education inequalities many low-income and communities of color face. Incorporating locally sourced foods provides children with healthier school meals, elevates underrepresented stakeholders in the food system, and increases income and land access for marginalized food producers.

When schools buy locally sourced food, it keeps money in the local economy and can create new jobs. The National Farm to School Network reports that for every $1 invested in farm to school programs, an additional $0.60-$2.16 is stimulated in the local economy. 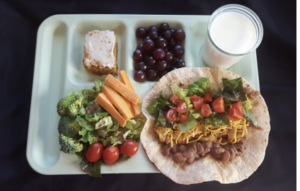 Photo of a lunch at Litchfield Public Schools from NDE

Litchfield Public Schools is an active participant of Farm to School programming and educates its students about Nebraska agriculture through their greenhouse. As a participant in Nebraska Thursday’s, they are part of a program led by the Nebraska Department of Education (NDE) that encourages school districts to serve locally sourced meals the first Thursday of every month. 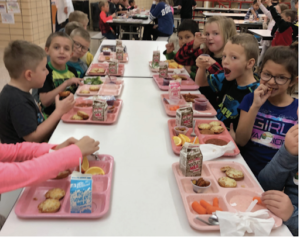 Photo of students at Sutton Public Schools from NDE

NDE’s Harvest of the Month program highlights local produce from Nebraska each month by allowing students the opportunity to taste a wide variety of fruits and vegetables in local school districts throughout the year. Sutton Public Schools implemented this program with recipes designed to spotlight the produce of the month, such as winter squash, turnips and cabbage in taste testing events, as well as educational activities such as trivia and coloring pages.

The Nebraska Beef In Schools initiative partners with school districts, The Nebraska Beef Council, and local producers to provide students with locally grown beef. In Thayer Central Community Schools the initiative works on teaching students where their food comes from, as well as spotlighting Nebraska beef in school lunches.

Farm to School has wide ranging benefits that extend beyond just the cafeteria. 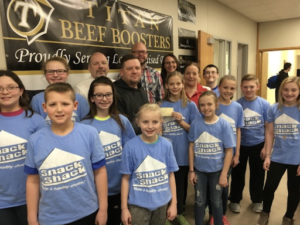 From students and families to school districts and local producers, Farm to School programs illustrate some of the very best Nebraska has to offer.

Nebraska Appleseed and Nebraska’s Go Big Breakfast coalition plans to engage on Farm to School programming as the momentum continues across the state.