Take Action: Tell your Representatives to support The NO BAN Act 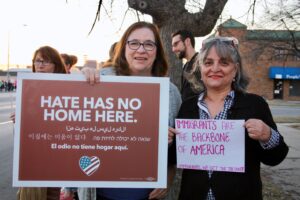 This week, the House will vote on The NO BAN Act, which would repeal the Trump administration’s destructive Muslim, asylum, and refugee bans, and limits future administrations from enacting similar bans.

Nebraskans recognize the great contributions new families bring to our communities. These harmful policies run contrary to Nebraska’s values of welcoming refugees and asylum seekers by cruelly turning our backs to families who are seeking safety from violence and persecution. Judging people by their religion or where they were born violates our ideal of treating people of all faiths with dignity. After these bans were enforced, immigration from countries targeted by the bans, primarily Muslim-majority countries, plummeted. The asylum ban has resulted in children being torn apart from their parents and being locked in cages.

That’s why it is important for you to speak up today. Let your U.S. Representative and Senators know that you support The NO BAN Act because it will put an end to tearing apart families and will strengthen our communities. Tell them you want us to live up to our fundamental values of welcoming new neighbors who want nothing more than a safe home and a vibrant community they can contribute to every day.