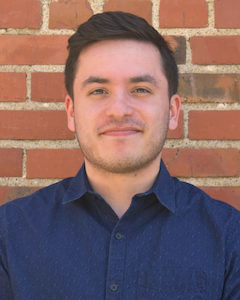 Edgar Reynaga joined our team as the Development Associate in the Spring. Edgar graduated from the University of Nebraska – Lincoln with a Bachelor’s degree in Political Science.

“When I interned for the Immigrants & Communities Program in the fall of 2016, I knew then I wanted to work in nonprofit. Interning through an election cycle was an inspiring time and revealed the importance of an organization like Appleseed, which is working in communities all across Nebraska. From creating voter guides, to phone banking and canvassing, these moments helped me discover my voice and the power of collective action, spurring passion in me for helping others. I know my story as a first-generation American wouldn’t have been possible without people deciding to stand up for what’s right, and Appleseed is filled with nothing but those kinds of people.”

For Edgar, our giving days are one of the most rewarding times at Appleseed.

“Beyond the long days of work that go into these giving days, it’s humbling to see each of those contributions come through, each attached with their own, unique story of someone who believed so deeply in the mission of Appleseed, that they are willing to depart with a piece of their finances.”

Aside from beating everyone in sports trivia, Edgar enjoys watching and talking baseball, watching, talking, and writing movies, and collecting sneakers. We’re excited to welcome back Edgar!

You can reach Edgar at ereynaga@neappleseed.org