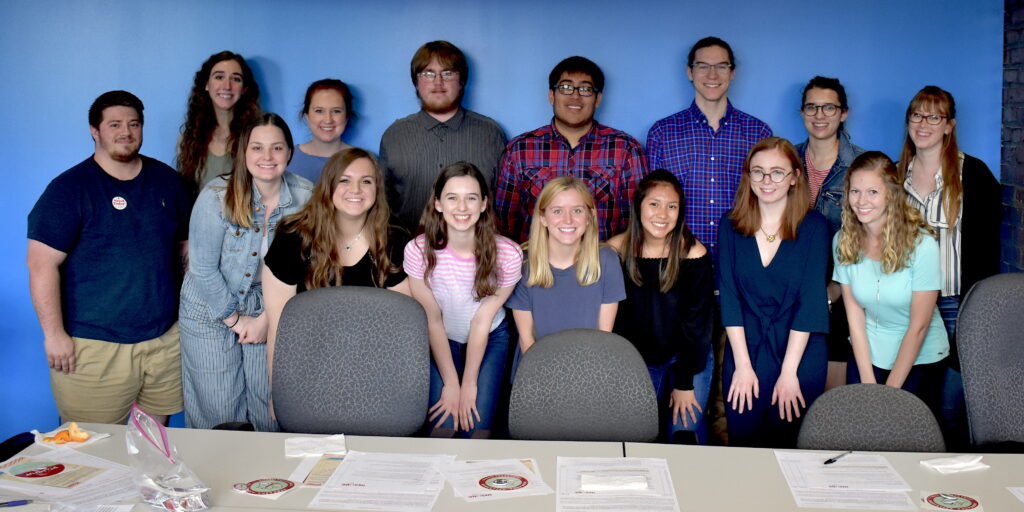 Each year, Appleseed is fortunate to work with bright, talented, and dedicated interns and law clerks who are passionate about fighting for justice and opportunity for all Nebraskans. Meet some of these outstanding young Nebraskans who dedicate their time to positive change in their communities.

Special thanks to Immigrants & Communities intern Maret Wibel for putting together these stories.

Sheldon Bale is an intern this summer with Nebraska Appleseed’s Administrative program. He is from Seward and this fall will be a senior at Seward High School. Sheldon is interning with Nebraska Appleseed because he wants to be able to help people in his community as well as better advocate for those in whatever community he settles in later in life.

After college, Sheldon plans to pursue a law degree! He is also involved with the Seward High School band where he is the section leader for the bass line.

Kylie Cappellano is an intern this summer with Nebraska Appleseed’s Immigrants and Communities Program. She just completed her junior year at the University of Nebraska-Lincoln where she is majoring in Political Science and TV Broadcasting Production with minors in Human Rights, Global Studies, and Spanish. She eventually plans to attend law school so that she can work in a field that advocates for human rights.

Kylie has been interested in human rights work since grade school and is excited to have the opportunity to work in a field that aligns with her passions. She wants to create a society that shows more humanity and advocates for those who do not have a voice.

In her free time Kylie loves spending time with her friends and family out of the lake as well as camping and at the pool. She loves to cook and come up with recipes as a way to de-stress. She loves to learn about the world around her and does so through both reading and traveling.

Allie Christianson is an intern this summer with Nebraska Appleseed’s Immigrants & Communities program. She just completed her sophomore year at the University of Nebraska-Lincoln where she is majoring in Global Studies and Political Science with minors in French and Human Rights and Humanitarian Affairs.

Allie has volunteered with Nebraska Appleseed in the past, and we are excited to have her with us as an intern. Allie has a special interest in development work and working with refugees and internally displaced persons in French-speaking countries. She wants to learn how to grow inclusive communities and foster a sense of belonging and home for all individuals while also experiencing and learning from their rich cultures along the way.

Nathan is excited for the opportunity to work with Nebraska Appleseed because of our dedication to policy advocacy and practice reform in child welfare. As a native Nebraskan who has personal experience in our foster care system, he is uniquely positioned to, and has a passion for advocating for those who have been in foster care.

Nathan enjoys fishing, camping, baseball, and trying new foods! He has two dogs and a bird that thinks it is a dog. After he graduates law school Nathan wants to advocate for policy reform as well as guardian ad litem work. He hopes to start a non-profit that works specifically for LGBT+ youth in foster care.

Emily Grode is a summer law clerk with Nebraska Appleseed’s Economic Justice program! This fall Emily will begin her third year at Creighton University School of Law. Emily was drawn to Nebraska Appleseed because of our mission to bring justice and opportunity to all Nebraskans, which aligns with her desire to serve the community.

In addition to her JD, Emily is receiving a MS in Government Organization and Leadership. This fall she will be traveling to Washington, D.C., to participate in an internship program and take classes. After graduation Emily plans to work in the public interest field servicing her community and the individuals within it.

In her free time Emily enjoys cooking, visiting local coffee shops and spending time with her cat, Remy. During her time at Creighton Emily has assisted in the revitalization of the Women’s Law Student Association at Creighton University and is excited about the organization’s growth.

Isabel Hasselbalch is an intern this summer with Nebraska Appleseed’s Child Welfare program.

Originally from Lincoln, Isabel attends American University in Washington, D.C., where she is studying International Relations with a minor in Art History. Isabel is excited to be interning with Nebraska Appleseed because it encompasses her interests in both social justice and law.

After she completes her undergrad, Isabel wants to attend law school and become a criminal lawyer. She also enjoys yoga and baking in her free time.

Ron Karls is an intern with Nebraska Appleseed’s Federal Policy team! Ron is from Arlington, Nebraska, and graduated this spring from Pitzer College in Claremont, California. Now that he has graduated, Ron is looking to attend law school this upcoming fall.

During his time in college Ron was an Environmental Studies major. This gave him a strong background in science, but during his sophomore of college he development a strong interest in policy issues. This led Ron to Nebraska Appleseed.

When he is not working at Appleseed Ron enjoys analog photography and fishing. He is particularly proud of a bike-share program he created for international and first-generation college students.

Katherine Lester is an intern with Nebraska Appleseed’s Collective Impact Lincoln Program! This fall she will be a senior at Lincoln High School and learned about Nebraska Appleseed through her school’s career day. At Appleseed, she hopes to learn strategies to address opportunity disparities in her community.

Katherine loves ballet, all kinds of music and watching The Bachelor! She participated in a six-week, intensive dance camp in Colorado last summer and was challenged to learn and grow in her passion for the arts.

After she graduates high school Katherine plans to attend college. She is considering studying within the medical field where she could advocate for equal opportunities for children’s health care. She also wants to study abroad and learn Spanish!

Katherine is an intern this summer with Nebraska Appleseed’s Immigrants & Communities program! An Omaha native, she is a senior Political Science and History double major with a minor in business at the University of Nebraska-Lincoln. She plans to attend law school after graduating in May 2019 so that she can continue advocating for justice in Nebraska.

Katherine is excited to work with Nebraska Appleseed because she desires to make a tangible difference and believes in Appleseed’s approach to enacting lasting change in communities. She wants to change the conversation around immigration to one that fosters learning and allows new Americans to feel welcomed in their community.

When Katherine is not at Appleseed she enjoys running and reading. Running allows her to clear her head while reading gives her an opportunity to relax. During her time at UNL, Katherine has been inducted into the Mortar Board Senior Honor Society, an organization centered around recognizing diverse scholarship, leadership and service on UNL’s campus.

Leslie Perez is an intern with Nebraska Appleseed’s Immigrants & Communities program this summer! Leslie is from Omaha, but now attends the University of Nebraska-Lincoln where she just completed her freshman year studying Psychology and Sociology.

Leslie is excited to intern with Nebraska Appleseed because she wants to gain experience working within the community. After she graduates from college she plans to attend law school! In her free time Leslie enjoys working out as well as reading and watching movies.

Shelby Rix is an intern with Nebraska Appleseed’s Economic Justice program! She is currently an art teacher at Mickle Middle School in Lincoln and holds a bachelor’s in K-12 Art Education and English Education 7-12th grade.

Through her time at Nebraska Appleseed, Shelby wants to give a voice to those who fall through the cracks and learn how to better advocate for others. Shelby hopes to eventually get her masters degree and teach every grade level!  In her free times Shelby enjoys reading, creating art and going to concerts. She also loves hanging out with her fur children Macklemore and Bill Murray.

Ellie Roselius is an intern this summer with Nebraska Appleseed’s Collective Impact Lincoln program! This fall Ellie will be a senior at Lincoln East High School. After she graduates she is considering a double major in Political Science and Marketing with Minors in Spanish and Communications in college.

Ellie is interested in the intersections between public policy and legal work. She is involved in Mock Trial club and interested in legal work. Ellie recently earned her Gold Award for Girl Scouts for developing and implementing a curriculum for elementary school clubs to teach foreign language and the acceptance of diversity.

Once she is done with high school Ellie hopes to have the opportunities to travel abroad and join a sorority. She plans to eventually become a lawyer.

Megan Stevens is a law clerk this summer with Nebraska Appleseed’s Economic Justice program where she is focusing on prison litigation. This is Megan’s second summer clerking for Nebraska Appleseed, and this fall she will be a a third-year law student at Creighton University in Omaha.

After she graduates Megan plans to focus on public interest law. In her free time she enjoys baking as well as traveling, including a trip to Paris this summer!

José Villa is a summer intern with Nebraska Appleseed’s Immigrants & Communities program. José is from Chihuahua, Mexico, but is living in Lincoln where he is going to be a senior at the University of Nebraska-Lincoln this fall where he majoring in Economics and Spanish.

Maret Wibel, an Omaha native and graduate of Omaha North High Magnet School, is an intern in Appleseed’s Immigrants & Communities program. She just finished her junior year at Concordia College in Moorhead, Minnesota, where she is majoring in Political Science and Global Studies with a minor in Foreign Affairs. When she’s not in class she can be found searching for a sunny spot in the library or listening to music and podcasts.

Last fall Maret went in Bangalore, India, where she studied sustainable development practices while staying with a Visthar, a local non-governmental organization. There she had the chance to learn from organizations bringing about social change in south India.

Maret believes in the importance of combining both good policy and grassroots initiatives which is why she’s so excited to be interning with Nebraska Appleseed this summer!

Annie is a law clerk with Nebraska Appleseed’s Health Care program. This fall she will be

beginning her third year of law school at the University of Nebraska College of Law. She specifically is passionate about helping children and the impacts that childhood has on the rest of one’s life. Before attending law school Annie received her undergraduate degree in English and Political Science. Annie wants to use her education to bring about lasting change in her community.

In her free time Annie enjoys reading and writing. She also really enjoys TV and movies. After graduation Annie plans to practice law in Omaha. She wants to work in guardian ad litem work within the Omaha community.

← You gathered the signatures! What’s next?
Tell Congress to say “NO” to federal foster/adoption discrimination →