This is a guest post by Appleseed intern Scott Jorgenson. 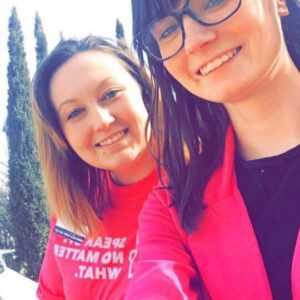 Sydney and Alexis, both recent Doane University graduates (Sydney in 2014 and Alexis in 2015), have been active in the community for some time.

Whether it has been volunteering with Appleseed, working as a Victim Assistant Advocate at the Hope Crisis Center, or working on a city council election campaign, you can often find these two volunteering for causes they believe in.  When asked which issues are important to them, they cite women’s rights – reproductive rights, domestic and sexual violence, along with voting rights and gun control.

With Nebraska Appleseed, Sydney and Alexis have volunteered in a variety of areas, from get out the vote efforts and canvassing, to phone banking and letter deliveries.  Discussing the highs and lows of their volunteer experience, Sydney stated that, at times, phone banking could be frustrating because “sometimes you go long periods without people answering, or people being rude.” But on the flip side, Alexis said that it was also rewarding “when people were grateful about how they were educating constituents about how to participate in the election…” and “not trying to tell them how to vote.”

Among the biggest highlights of their volunteer experiences, Alexis mentioned a couple memorable experiences from their canvassing efforts to get out the vote that demonstrated the impact someone can have in the community.  First, they were able to register a younger man to vote, who then voted early in the election.

For the second story, Alexis says, “There was a guy who was a (former) felon who called us over during canvassing and explained he was a felon, but wanted to vote… [He] thought there was a lifetime ban on voting…” and they were able to explain to him, “that since it had been more than two years since [the completion of his sentence], he could register to vote and vote.”

When not volunteering in the community and being activists, Alexis and Sydney both enjoy hanging out with their pets and watching their favorite TV shows in their free time, although Alexis admittedly also tends to “think about doing activism stuff when I’m not.”

Thanks to Sydney and Alexis’ efforts, we have seen increased voter registration and the impact volunteers can have on the community around them!