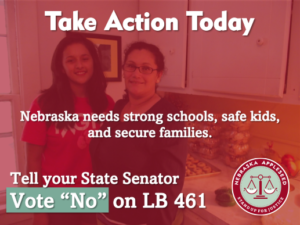 With a state budget shortfall of more than $1 billion, we have to look for every solution to protect Nebraska’s important public investments that make life better for everyone.

Things like good schools, safe roads and highways, and programs that help hard-working families get ahead.

But a dangerous tax plan will be up for debate on Friday in the Legislature that puts these investments at risk. Call or Email your State Senator today. Urge them to vote “NO” on LB 461.

Let’s be honest about what LB 461 really is — it’s a big income tax cut for the wealthiest Nebraskans that will do little for the vast majority of people with middle or lower incomes. Instead, LB 461 would force lawmakers to balance our budget on the backs of hard-working Nebraskans.

LB 461 does nothing to solve our current budget problem, but also contains automatic cuts in the future that will hurt Nebraska’s ability to pay for things we know lead to a strong economy and high quality of life:

In other states, similar tax bills have busted the budget and slashed important services. In Oklahoma, it led to a budget crisis that is forcing schools to cut down to a four-day week. Kansas has become a national cautionary tale after steep tax cuts led to such woeful school funding the state’s Supreme Court stepped in and ordered a fix.

At the end of the day LB 461 is a big giveaway to a few people, but with high costs to ALL OF US. That’s why three former State Senators wrote in the Lincoln Journal Star this week that LB 461 would do long-term damage to the state’s budget.

Contact your State Senator today. Tell them vote “NO” on LB 461 so we can continue to protect the Good Life.