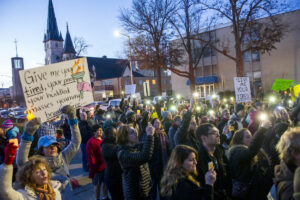 These executive orders do not reflect America’s strongly held values that insist that we create safe homes for those escaping violence and persecution. And judging potential immigrants based on religion also violates our ideals of treating people of all faiths with justice and dignity.

It’s important for you to speak up today! Please contact our U.S. Senators and your Congressman and tell them you oppose these discriminatory executive orders.

Tell our members of Congress:

Many bipartisan leaders and Nebraska community members already have spoken out against the harm this order will do to U.S. security and to people fleeing violence. Many hundreds of Nebraskans attended weekend events supporting refugees. Senator Sasse also spoke out against the order, calling it “too broad.”

Call our members of Congress today. Tell them we support the U.S refugee program, and we support immigrant and refugee Nebraskans as valued members of our communities.