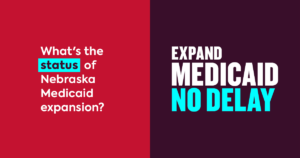 2 thoughts on “Medicaid expansion: Acting with urgency for Nebraskans’ health”