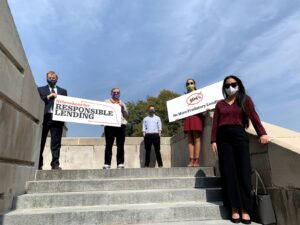 Over 700,000 Nebraskans, or over 83%, voted FOR Initiative 428 in the 2020 election to reform payday loans and cap interest at 36% APR (annual percentage rate) (1, 2)., This landslide victory over predatory lending practices in Nebraska resulted from years of legal research, policy advocacy, and community organizing at the state and national level.

In this blog, we’re looking back at over a decade’s worth of advocacy efforts to regulate the payday lending industry in order to appreciate the significance of the Initiative 428 victory and look ahead at what to expect as Nebraska implements the new measure.

The long road to consumer protections in payday lending

Although we, at Nebraska Appleseed, have worked to eradicate poverty since our founding, our involvement in payday lending reform began in 2008. We supported several legislative bills reforming payday lending from Senator Amanda McGill (3) and Senator Danielle Conrad. Neither of these bills made it out of committee. (4) In 2009, Senator McGill’s bill (5) was reintroduced but still did not make it out of committee.

This work culminated in LB1036 (2016), which was introduced by Senator Kathy Campbell. (6) To demonstrate the payday lending industry’s impact on low-income borrowers, Economic Justice program organizers Tori Ostenso and Kait Madsen conducted a focus group of payday loan borrowers in Norfolk, NE. Our report, “A loan at what cost? Borrower’s Experience of Payday Loans in Nebraska” (7) was delivered to the members of the Banking and Finance Committee. Unfortunately, LB1036 did not advance out of committee.

In 2017, LB194, introduced by Senator Tony Vargas, capped payday loan fees, ensured more time to repay the loan and other improvements, and included yearly reporting requirements for payday lenders. (8) While LB194 passed in 2018, the streamlined version did not have many of the core reforms originally proposed. (9) However, LB194 did close significant loopholes. It required that payday lenders disclose more information to consumers and issue an annual report to the Department of Banking that discloses the number of consumers, loans, and average interest rate. LB194 was a significant step forward, but it did not change the cost and fee structure that made payday loans dangerous.

Reforming the payday lending industry with a ballot measure

After several attempts at reform in the Legislature, advocates recognized we would continue facing hurdles with the banking committee, even though this issue had broad support. From there, advocates turned to the idea of pursuing reform via a ballot initiative.

The Women’s Fund of Omaha, Voices for Children in Nebraska, and Nebraska Appleseed began discussions to coordinate the effort, including coalition building with state and national partners, fundraising, policy writing, signature-gathering efforts across the state, regular meetings to coordinate advocacy and communications, and community organizing to connect with impacted individuals.

In June of 2020, the initiative qualified for the ballot with over 120,000 signatures! Despite many obstacles — including the challenges of organizing during the COVID-19 pandemic and three legal challenges attempting to eliminate the ballot measure —  the campaign advanced. 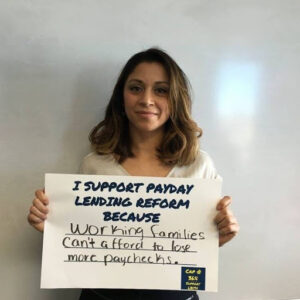 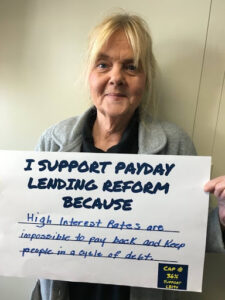 With the rate cap passed, what changes can we expect to see in Nebraska?

Nebraska follows our neighboring states, Colorado and South Dakota, in enacting legislation to limit how payday lenders operate. These states have seen positive results on their economy and for former payday borrowers.

In South Dakota, less than two months after voters approved an interest rate cap on payday lenders, 121 lenders opted to leave the state, according to state money lender license totals for 2017. (10) Former payday lending stores are now churches, small businesses, and credit unions that provide more equitable lending options for South Dakotans. (11) In Colorado, banks and credit unions moved into communities where payday lenders operated to provide more responsible financial options. (12) We expect to see similar changes to the lending landscape in Nebraska as we implement this measure.

While Initiative 428 clears a pathway to financial independence and security for all Nebraskans, this measure is especially beneficial for Black, Latinx and Indigenous community members because predatory loans have disproportionately impacted these communities for a number of reasons. This includes systemic exclusion from traditional banking due to discrimination, (13) systemic discrimination in housing, lending, policing, and employment contributing to higher rates of poverty, and the increased prevalence of payday lending storefronts in communities of color. (14)

As the measure goes into effect amidst unprecedented economic uncertainty, it will be up to political leadership and community advocates to be more vigilant than ever in responding to our communities’ needs and ensuring that safe, responsible loan products are available and accessible to all.

On the state level, we must monitor any attempts to pass legislation that allows lenders to operate in the same predatory manner as before. We must also keep watch on federal regulatory trends. This includes the looming threat of “rent-a-bank” schemes to undermine state interest rate caps (15) and the transition of leadership and renewed consumer protection-focus from within the Consumer Financial Protection Bureau due to the incoming Presidential Administration. (16) 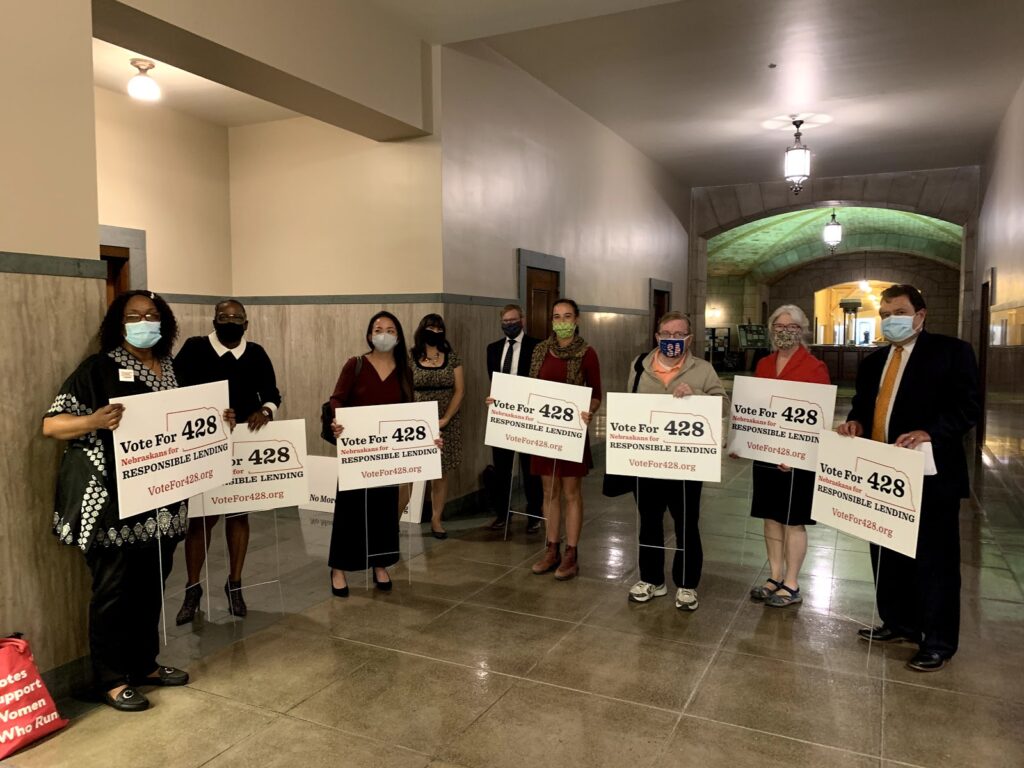 Because of the dedication of an incredible coalition of supporters, outstanding legal team, and your strong voter support, Initiative 428 made it to the ballot. It was victorious in the November 2020 election.

← This holiday season, a call to Congress is a gift to our communities
Afterschool snacks and meal program available for school districts to fill gaps →