This is a guest post from Appleseed intern Matt Lenz 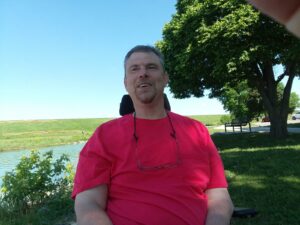 Vincent Litwinowicz came to Nebraska by way of New Orleans, where he grew up, with time spent in college at Michigan Tech, where he studied engineering. It was during that time at Michigan Tech that Vince realized that he was not happy with his career path and he returned home to New Orleans where he volunteered at Habitat for Humanity for a year, eventually picking up a job with them renovating houses for needing families.

A year after Hurricane Katrina, Vince left New Orleans and came to Lincoln. By this time, he had developed an interest in residential construction – working for people, not businesses – a passion which was sparked in part by the time he spent with Habitat. He enrolled at the University of Nebraska-Lincoln and started studying for a Master’s, intending to further develop his career.

During this time, Vince was diagnosed with multiple sclerosis. The illness forced him to reorganize his life and change his habits, but it hasn’t robbed him of any of the vitality and passion that shines through when you meet him. He is a powerful presence in any room, humble but always full of belief in the importance of helping the vulnerable. All it takes is listening to Vince speak once about the issues that are closest to his heart – helping children, people with mental illnesses, and youth in foster care – to see that Vince epitomizes the concept of the good neighbor, someone who can be counted on to care.

After his diagnosis, Vince came across Appleseed and began volunteering, attending and helping out at events all across the board – from phone banks to rallies at the State Capitol. He has been vital in getting the word out about issues from Medicaid Expansion to the importance of the ACA to meeting with lawmakers and demanding fair policies for everyone. For Vince, volunteering and activism go hand in hand with a desire to energize people and get them involved in their political futures: “You gotta be out on the street,” he says. “It’d be amazing if everyone stood up and got out there… things would change.”

In his free time, Vince enjoys writing. He’s been writing poetry recently, although he’s building up to a memoir project in the future, something that will “be in the self-help section”, he says with a laugh. Record jackets hang on the walls of his apartment, by artists like John Prine and Bonnie Raitt. Vince lights up when he talks about them. He listens to everything (he has a soft spot for classic Metallica), but Prine and Raitt are particular favorites for him. He recommended a song to me, Prine’s “Angel from Montgomery”, a slow, steady folk song that Prine wrote for Bonnie Raitt. In the chorus, Prine sings about an apathy that he sees in the American nucleus:

And come home in the evening and have nothing to say

Vince has something to say, and we are all better off because of it.