Throughout our 20th Anniversary year in 2016, we are taking a look back at the influential people who helped Nebraska Appleseed grow into the advocacy organization we are today. These “Roots of Appleseed” helped shape our mission of fighting for justice and opportunity for all Nebraskans. 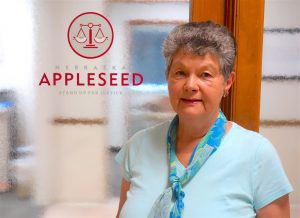 After a mid-life career change, Sue Ellen Wall was hired as Appleseed’s first staff attorney in 1998.

Fighting in the courts on behalf of Nebraskans with low incomes wasn’t the first career choice for Sue Ellen Wall, but without her midlife career change, Nebraska Appleseed might never have grown into the legal advocacy organization we are today.

Sue Ellen was no stranger to advocacy work on behalf of women before finding Appleseed. As her children were growing up, she found ways to make a difference as a volunteer and leader in many local organizations, serving with the University of Nebraska Faculty Women’s Club and as a United Way volunteer before eventually becoming the staff director of the Lincoln-Lancaster Commission on the Status of Women in 1987.

But over the next several years, her mind kept drifting back to a possibility she had long considered – to attend law school. At age 50, she enrolled in the University of Nebraska College of Law, one year behind her youngest son Stefan.

“He made law review, and I finished right smack in the middle of my class,” she said.

Sue Ellen graduated law school in 1998 and knew that her nontraditional career track might narrow the possibilities to find a legal job. Luckily, she had a connection with Appleseed’s founding executive director Milo Mumgaard, who shared Sue Ellen’s passion for advocating for positive change. Shortly after joining the bar, Sue Ellen became Appleseed’s first staff attorney.

“I didn’t interview with anybody else because I didn’t think anyone wanted to hire a 53-year-old woman with her own opinions,” Sue Ellen said. “Milo and I knew each other vaguely, so he started to talk to me about coming on board, which I did. The job at that time was part time.”

Though, Appleseed could only afford her services, part-time, Sue Ellen quickly made a full-time impact. Sharing a small office with two other part-time staff, Sue Ellen was the attorney of record on some of our biggest early court victories, including beginning our class-action suit Mason v. Nebraska (2000), which challenged restrictions on family size for clients of Nebraska’s Aid to Dependent Children (ADC) cash assistance program.

“The primary project I worked on was to eliminate the draconian section of the law that denied any additional money to a family if another child was born more than 10 months after they were approved for benefits,” Sue Ellen said. “The additional child could receive a whopping $79 more per month.”

Thanks to Sue Ellen’s dogged work, the Nebraska Supreme Court struck down part of a law that placed limits on family size for disabled ADC clients and awarded retroactive benefits to the families in question.

“Nebraska became the first, and I believe only, state where there has been successful litigation against the family cap,” said Appleseed Executive Director Becky Gould, who handled the appeal of the Mason case to the state’s Supreme Court.

Following this legal breakthrough, Sue Ellen led other Appleseed efforts to increase access to vital work supports for Nebraska families trying to work their way out of poverty. In 2000, Sue Ellen helped Appleseed file Jones v. Nebraska to challenge the legality of how the state was imposing a two-year time limit to receive cash assistance and Kosmicki v. Nebraska, which paved the way for ADC participants to pursue postsecondary education to improve their job prospects.

“Appleseed is one of the places that works to help more people survive at a higher level of productivity so they can contribute at a higher level,” Sue Ellen said, “and we will all benefit from maximizing the human potential around us, no matter what original barriers were set before them.”

After leaving Appleseed after a few years to focus solely on her private practice, Sue Ellen continued to work to clear barriers for others trying to escape poverty, until retiring in 2014. Her early efforts helped grow what would eventually become Appleseed’s Economic Justice program, where we continue to use litigation to challenge systems that prevent hard-working Nebraskans from getting ahead.

Her midlife career change gave Sue Ellen Wall the purpose she was looking for, and gave Appleseed the spark and guidance we needed to fight for justice and opportunity for all.

“Everyone who works at Appleseed has a sense of caring about the world and the people in it,” she said. “If they didn’t, there are plenty of other places to go.”