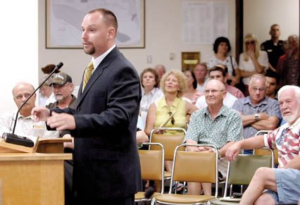 Norm Pflanz joined Appleseed in 2008 and currently serves as a foreign service officer in Turkey.

Fighting for human rights has taken Norm Pflanz around the world, but it was happenstance that led him to find a chance to stand up for justice in his own backyard.

By 2007, Norm already had long been passionate about the rights and dignity of people from around the world. After earning his law degree, his passion took him to Hong Kong, where the Deshler, Neb., native was working toward an advanced degree in human rights, when he decided to read up on what human rights issues were being faced in his home state.

By chance, he came across a piece on Nebraska Appleseed’s work to fight for safer working conditions in meatpacking and poultry plants, an industry that employs a large number of immigrant Nebraskans.

To Norm, it was as though the piece was written just for him. He remembers sending an email to Appleseed’s founding executive director Milo Mumgaard and asking if there was anything he could do to help. At the time, Appleseed was looking for an attorney to work in our Immigrants & Communities program, and Norm sounded like a good fit. He, however, still had a difficult choice to make.

Norm had already accepted an internship offer at the United Nations Office of the High Commissioner for Human Rights’ regional office in Bangkok, Thailand, an enviable job for a young attorney looking to fight for human rights. But the chance to fight for justice in his home state proved too strong, and Norm joined Appleseed in 2008.

“I’m a dime a dozen in D.C.,” Norm said. “I came to realize I could make much more of a difference on a local level, so I made the decision to come back to Nebraska.”

Norm quickly dove into the work at Appleseed of working to build strong, vibrant, and inclusive communities. He testified at the Legislature on bills to preserve in-state college tuition for 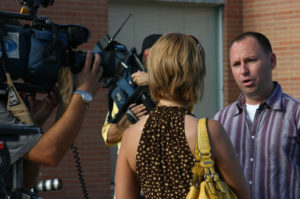 Norm was part of Appleseed’s work to help lift up immigrant voices in Fremont.

undocumented Nebraska youth and was part of the large coalition that helped defeat several harsh anti-immigrant bills. And he also contributed to the meatpacking work that first drew him to Appleseed, helping to compile our 2009 survey “The Speed Kills You”: The Voice of Nebraska’s Meatpacking Workers.”

Norm’s passion for immigrant and human rights runs deep in his family. His grandfather was a German immigrant, and Norm grew up in communities where first-generation immigrants faced many of the same challenges that immigrants in Nebraska do today while trying to work to create a better life for their families.

“He came to work. He came to build a family and a community,” Norm said. “I saw exact parallels to today’s immigrants. It’s just the skin complexion is different and the language is different.”

After leaving Appleseed in 2011, Norm returned overseas to continue fighting for human rights. He spent five months living in Ankara, Turkey, for a crash course to learn Turkish, which helped him secure an invitation from the U.S. State Department to become a Foreign Service Officer. From 2013-15, Norm served as the human rights officer at the U.S. Embassy in Bangkok, Thailand, and is now serving a two-year posting at the U.S. Embassy in Ankara, Turkey.

Norm has traveled the world to stand up for the human rights that everyone should have, and he said he’s grateful Appleseed gave him the opportunity to do the same for his fellow Nebraskans.

“I think it starts with the quality of people who founded Appleseed and kept it going,” he said. “The people who are committed to the causes, but also extremely intelligent and talented in doing so. I saw their leadership skills every day and their commitment to justice. I would’ve been surprised if it didn’t succeed.”