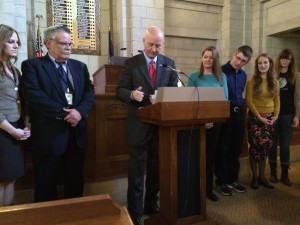 This morning, January 14, Governor Ricketts signed a proclamation establishing January as Human Trafficking Awareness Month in Nebraska.  And in honor of Sunday’s Human Trafficking Awareness Day, a group of nearly fifty people braved the cold outside the State Capitol for a vigil to bring light to the issue of human trafficking, the second largest criminal industry in the world.

I was honored to have the chance to be a part of this vigil and speak about Nebraska Appleseed’s research on the connection between children who are in our state’s foster care system and sex and labor trafficking. This event was organized by Jasel Cantu with the Nebraska Latino American Commission and the Governor’s Task Force on Human Trafficking.

State Senator Patty Pansing Brooks (District 28) and State Senator Adam Morfeld (District 46) spoke on the importance of fighting this hideous crime and their commitment to doing so in the Nebraska Legislature. 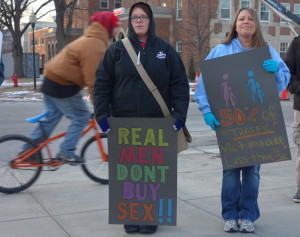 Supporters attended a vigil outside the State Capitol on January 11, 2015 to remember victims of human trafficking.

Rachel Davis Pointer, the founder of the Free the People Movement shared her counter-trafficking experiences after being a sex trafficking victim herself, starting at six years old.

“I took several years before I could even come to terms with the fact I was human trafficked in the first place,” Pointer said. “That I was exploited, that what happened was something that happened to me not because of something I chose.”

The group then marched around the blue-lit Capitol, carrying signs and discussing the great work being done in Nebraska on this issue. As I shared in my remarks, Appleseed will continue to be available as a resource to child welfare attorneys working with children they believe may have been trafficked as well as monitoring the implementation of the Preventing Sex Trafficking and Strengthening Families Act.

← ACTION ALERT: We can’t move backwards on immigration
An early investment pays off big for Medicaid →