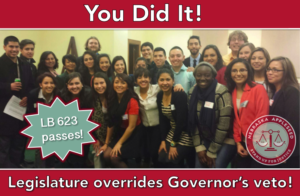 On May 28, the Nebraska Legislature voted 34-10 to pass LB 623 and override the Governor’s veto. Passing this bill makes Nebraska the final state to allow young “DREAMers” – immigrants who grew up in Nebraska after being brought to this country as children – to apply for driver’s licenses.

But, the bill never would have gotten this far without riding a statewide wave of support that grew in the past few months.

The bill, introduced by Sen. Jeremy Nordquist and made a priority by Sen. John McCollister, was advanced to the floor of the Legislature from the Transportation Committee on Friday, April 10 eventually gathered an impressive 28 co-sponsors.

This broad base of bipartisan support within the Capitol also was clear across the state. From Scottsbluff to Omaha, public messages of support have rolled in, recognizing the need to allow these young Nebraskans to be able to more fully contribute to their communities.

Here’s a timeline of the growing support for LB 623:

April 10 – The Transportation Committee votes 5-2 to advance the bill to the floor of the Legislature.

April 13 – The Douglas County Board of Commissioners passed a resolution in support of the bill.

April 14-15 – Three more senators sign on as co-sponsors bringing the total to 28.

April 28 – Columbus Chamber of Commerce joined in with their support.

The support continued with voices across the state chiming in their approval.

Business leaders told the Omaha World-Herald Nebraska must be a more inclusive state to appeal to young workers and entrepreneurs, specifically mentioning LB 623.

Grand Island Independent staff editorial – “Giving young immigrants driver’s licenses a win for the state” (April 15).
We thank all of the State Senators who supported this bill and voted for its passage. It’s a wise policy move in the interest of public safety, and a big step forward to recognize the value that these young Nebraskans add to our communities and state.