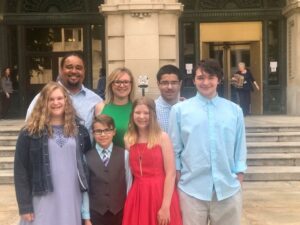 Note: We first heard Jessyca’s family’s story earlier this year. In January, she talked about how repealing the ACA would be incredibly dangerous for her family, specifically her children.

She is one of thousands of worried Nebraska parents whose lives – and the lives of their children – are in the balance of Congress’ health care negotiations.

The author lives, works, and raises her family in Omaha. This is published with her permission.

The most frightening day of my life was the day after Christmas, December 26, 2013.

That’s the day I had to take my son to the Intensive Care Unit at Children’s Hospital where he was diagnosed with Type I diabetes.

As I worried about what this would mean for my son’s future health, my fears grew because at the time, I couldn’t afford health insurance for my son.

I don’t mind admitting I was embarrassed because I couldn’t pay for coverage for one of my kids. The costs of health insurance offered by my job kept going up, and I could no longer afford a family plan at the time my son’s illness was diagnosed. Because he was uninsured when his diabetes was discovered, it was labeled a preexisting condition. I worried my son would never be able to get health insurance for the rest of his life.

Our lives were saved just five days later. On January 1, 2014, the Affordable Care Act went into effect and changed everything for millions of families like mine. Insurers were now required to sell plans to people who battled diabetes like my son, and others who survived cancer, who suffered accidents on the job, or who were just dealt a bad hand by their families’ genetics.

I could now buy a plan that covered my son for a monthly price I could afford. Without this insurance, I knew that my son’s treatment could mean burying us under a mountain of medical bills. My son’s medical needs would cost about $3,500 per month without this health insurance thanks to the ACA.

Without this coverage, we would have been better off if I quit my job so my son would become eligible for Medicaid. But now, I can continue to work and afford coverage for my whole family.

Now, I’m terrified of what could happen to our family if the Senate passes a bill that upends the health care system. Every bill that’s been measured by the Congressional Budget Office would force tens of thousands of Nebraskans to lose health insurance, including people in my family.

The Senate’s plans could let insurance companies go back to denying coverage to people with preexisting conditions or make it so expensive there’s no way we could afford it.

I am the adoptive mother of two other children who are covered by Medicaid, which also is under threat. Senate proposals would dramatically slash Medicaid, which provides covers about 1 in 8 Nebraskans, nearly all of them children, the elderly, or people who are disabled. These are the people in our state who need health care the most, and have the fewest options to get it.

If the Senate passes one of these bills, it would mean I’d have no way to provide health insurance to three of my children. If my son doesn’t have insurance, he dies. If he doesn’t die quickly, he surely would first go blind, lose his kidneys, or lose one or both of his feet. That isn’t hyperbole. That is his reality.

I’m pleading with Sen. Deb Fischer and Sen. Ben Sasse not to vote for any bill that takes coverage away from Nebraskans. The ACA isn’t perfect for every family, but it’s a great start, and it is a lifesaver for mine. Work together with your colleagues to improve upon what’s working and let every Nebraska family afford the health care they need.

Any parent just wants to make sure their kids are safe, healthy, and happy. The ACA and Medicaid allow me to give my children at least a chance to grow up and build the kind of lives that they want.

If our Senators do vote to take away our insurance, I hope Senators Fischer and Sasse have the courage and the courtesy to look my children in the eyes and explain to them why they shouldn’t have that chance.