This year, we present the Roots of Justice Award to the Crete Welcoming Community in honor of their outstanding welcoming and inclusion practices for recent immigrants and all residents in Crete, Nebraska. 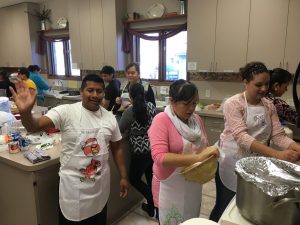 The Crete Welcoming Community will be recognized with this year’s Roots of Justice Award.

From one generation to the next, the American Dream continues to unfold in Crete, Nebraska.

A pioneer town founded in 1860 by European immigrants, Crete has become a diverse and thriving home for folks who can trace their heritage all over the globe. At town potlucks, platters of kolaches and sauerbraten are tucked between steaming dishes of pho, eggrolls, tamales, and plantains. This serves as a small illustration of the greater picture — in Crete, everyone has a seat at the table.

Before Crete was a part of Welcoming America, helping to develop promising practices as the national welcoming network first started, and before they became a Welcoming City both with Welcoming America and through the White House Task Force on New Americans, Crete had already been a leader in developing an inclusive community. “They’ve long been really natural and ahead of the curve in thinking proactively and creatively about how to make their community as welcoming and inclusive as possible,” said Christa Yoakum, Nebraska is Home Coordinator at Nebraska Appleseed.

In a growing national movement of communities who are recognizing our communities are strongest when everyone feels welcome, Crete stands as an example of what an inclusive community looks like. Welcoming isn’t just something that they do, it’s who they are. From hosting the statewide Nebraska Welcoming Convening, to preparing Welcoming Packets for families who are new to Crete, to ensuring diverse perspectives are part of all planning, they embody inclusion with their words and actions.

A whole-community approach is part of what makes them so effective. Solutions come from the community and bring together many partners. “Diverse leaders, city government, libraries, schools, local nonprofits, businesses, and churches – they all jump in and say, ‘I can do this piece,’ ‘My organization can do that piece,’” Yoakum said. “They all see it as their role to come together, plan together, and do this.”

Their commitment to welcoming can be seen in almost every facet of the community. From their addition of a bilingual and bicultural specialist in city government to address community inclusion, to the schools’ whole-family approach to education that includes parents and creates a hub for welcoming, to the active outreach done by faith organizations and small business owners, everyone takes the extra step to ask, “Is this good for everyone? Is it working for everyone? Who else should be included?”

When considering the outstanding leaders in Crete, Darcy Tromanhauser, Immigrants & Communities Program Director, remarked, “Within this group and this community you could be recognizing any one of these individuals in their own right, but what’s beautiful is that they don’t care about that.”

The strength of the community lies in their collaborative effort and humble, welcoming spirit. Which is why Nebraska Appleseed is honored to be able to recognize the Crete Welcoming Community with the Roots of Justice Award. Their community stands as a beautiful example of the positive change that can happen when individuals come together to create a safe, welcoming home for all.