This year, we present the Seeds of Justice Award for outstanding work in the field of public interest law to ACLU of Nebraska.

Buy your tickets today and see ACLU of Nebraska honored at the Good Apple Awards!

Fifty years ago, a force to be reckoned with arrived in Nebraska.

ACLU of Nebraska will be recognized with our 2016 Seeds of Justice Award.

That force was the American Civil Liberties Union: an organization with a rich history of championing civil liberties and defending fundamental rights for all. Now, in the ACLU of Nebraska’s 50th anniversary year, Nebraska Appleseed is proud to honor our incredible partner with the Seeds of Justice Award for their outstanding work in the field of public interest law.

The ACLU’s tenacity and willingness to take on the hard fight sets them apart. “They’ve been on the front lines of some of the toughest civil rights and constitutional rights questions that have presented themselves at both the state and national level,” says Becky Gould, Nebraska Appleseed’s Executive Director. “They’ve been able to really hold the line in protecting people’s freedom.”

In the past five years alone, ACLU of Nebraska has partnered with Nebraska Appleseed in in some of our state’s most important fights for justice and opportunity. From fighting against racial discrimination, to preventing discrimination in the foster care system, to protecting voting rights, to combatting anti-immigration policies. “They’re a great legal partner and policy partner for us. We work in tandem really well,” Sarah Helvey, Director Appleseed’s Child Welfare Program, emphasizes. 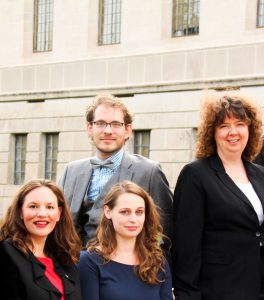 Members of the ACLU of Nebraska staff.

Gould recalls when the two organizations shared more than just strategy. “We shared a copier,” she said smiling. Somehow, the intertwining of the two organizations, right down to their office supplies, seems fitting. Collaboration, partnership, and shared space marks ACLU’s impact on the state. Gould elaborates, “They have always been good partners with other organizations looking to collaborate. Looking to not duplicate work being done by others but enhance it.”

And enhance it they have. Not only through their exemplary track record of success and fierce dedication to civil liberties in Nebraska, but through the seeds they have sown through their encouragement of others. Amy Miller, ACLU’s Legal Director, has served as a mentor to many attorneys at Appleseed, and ACLU is constantly looking for ways to ignite passion for public interest work in young and aspiring lawyers.

Their dogged pursuit of equity serves as a deterrent to those who violate the law, and as a steady conscience for all Nebraska entities. ACLU’s national and historical reputation combined with the skill and passion of the local staff makes ACLU of Nebraska a critical player in the fight for justice for all.

Congratulations to the ACLU of Nebraska on 50 years of excellence in public interest law. We at Nebraska Appleseed hope that you will be sowing the Seeds of Justice for many, many more years to come.