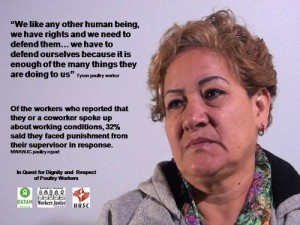 The Northwest Arkansas Workers’ Justice Center (NWAWJC) recently released a superb report on Arkansas’ poultry industry called “Wages and Working Conditions in Arkansas Poultry Plants.” The report, which examines a large industry in Arkansas – the state ranks second in the U.S. for broiler production– comes soon after an excellent report on the poultry industry from Oxfam America.

NWAWJC surveyed an impressive 500 Arkansas poultry processing workers and also conducted in-depth interviews with 30 workers. To no one’s surprise, its findings echo what researchers, academics, worker safety organizations, and government reports have found for years: that the meat and poultry industry houses some of the most dangerous working conditions in the country.

And the report finds that workers who experience this grueling work environment every day – at the cost of devastating repetitive-motion injuries to their bodies – earn poverty-level wages, are without basic benefits like sick days, and face continual discrimination and harassment.

According to the poultry workers surveyed, more than half of cutters, deboners, and hangers – positions that require the most repetitive motions – have suffered from a work-related injury due to the intense speed of work. The average processing speed documented in the surveys was 46 pieces per minute. One worker reported feeling like they were expected to work like robots.

Many workers commented on work speed and serious, debilitating injuries:

In addition to the deplorable safety conditions, the NWAWJC’s analysis revealed that:

Following this report, last week Buzzfeed reported on data compiled by Celeste Monforton, a professorial lecturer at George Washington University School of Public Health, which revealed that Tyson Foods averaged one amputation a month in the first nine months of 2015. You can also read more about Dr. Monforton’s findings at her blog The Pump Handle.