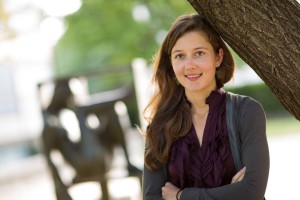 Appleseed intern Lee Kreimer is a Lincoln native who has lived in India, Spain, and Turkey during the last few years.

Immigrants & Communities intern Lee Kreimer may be a Lincoln native, but her journey to Nebraska Appleseed wasn’t just a drive across town.

“I’ve been fortunate to have had the opportunity to live in India, Spain, and Turkey throughout the last few years,” she says, “There’s nothing like experiencing the culture and lifestyles of different places firsthand.” Lee’s background of living abroad and being immersed in other cultures can also be demonstrated by the fact that she is studying Global Studies and Spanish at the University of Nebraska-Lincoln.

But despite the distance between where she has lived in the past and Nebraska Appleseed, there are a lot of reasons why Lee is here.  First and foremost, she says that she knows people who currently work here at Nebraska Appleseed and heard about the internship opportunity through them. After several hours of grueling interrogation, we discovered that the culprits were none other than our Child Welfare Program Associate, Becca Brune and our field director, Rachel Gehringer-Wiar.

Lee’s adventures outside of traveling around the world include: horseback riding, camping, bicycling, reading, traveling, gardening, sewing, cooking and spending time with family and friends. But in regards to her future adventure, Lee claims that it is pretty open ended, “My future plans are very much yet to be determined. I am considering law school, an advanced social science research degree, or work with a non-profit/NGO.”

It is also worth pointing out that Lee is an avid fan of the Marvel comic book universe, and did, in fact, believe that Loki was a puny god.