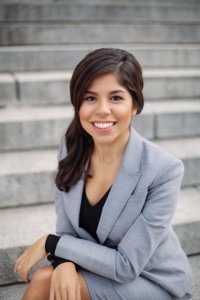 Appleseed law clerk Nelly Greenberg grew up in Denver and works in our Health Care program.

“As a woman of color from a low-income, immigrant household, Nebraska Appleseed’s posting immediately caught my attention. Growing up in a foreign country (Mexico) made me feel powerless because I was unaware of my rights,” Nelly says, “I have a strong interest in using my legal education to help the politically powerless, and spending my summer at Nebraska Appleseed will allow me to work at a nonprofit firm which strives to do just that.”

Nelly moved with her family to the U.S. when she was a child, and now she calls Denver her hometown. She made the descent from the mountains to the cornfields to study law at University of Nebraska College of Law in hopes of becoming a lawyer in Nebraska. It was through the Career Services Office that she heard about Appleseed and, “They really like [Appleseed Child Welfare Attorney] Robbie [McEwen] there.”

This summer, Nelly is researching health care access issues via the Medicaid program for a number of populations in Nebraska.

Nelly is also a self-described salsa fanatic (the spicy sauces, not the dancing). She also spends her time volunteering for People’s City Mission and Hearts United for Animals.