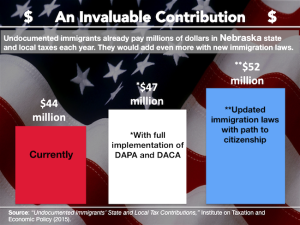 A new nationwide study by the Institute on Taxation and Economic Policy finds that undocumented immigrants contribute significant amounts of state and local tax revenue in Nebraska. Furthermore, the study found these tax contributions would increase significantly under the President’s executive actions and even more substantially under new, common-sense immigration laws.

Like other people living and working in Nebraska, undocumented immigrants are already taxpayers, contributing a collective $44 million in state and local taxes in 2012 according to the new report, “Undocumented Immigrants’ State and Local Tax Contributions.”

That total could increase by $3.3 million under full implementation of the President’s 2012 and 2014 executive actions that grant temporary relief from deportation to keep families united. Under comprehensive immigration reform, the revenue gain in Nebraska would be an estimated $8 million per year.

The new report includes detailed, state-specific data on the amounts immigrants contribute in sales and excise taxes when they purchase goods and services and property taxes directly on their homes or indirectly as renters. A majority of undocumented immigrants also pay income taxes, providing valuable contributions to our state’s budget. Additionally, the report calculates what undocumented immigrants are currently contributing compared with the increased amounts they would be able to add if granted legal residency.

“Once again, research clearly shows that hard-working immigrants contribute not only to our economy but also support to an integrated way of life in our communities,” said Heartland Workers Center Executive Director Sergio Sosa. “It also shows that behind any taxes contributions are human beings who care about their jobs, families and communities.”

“We’ve known that passing updated immigration laws is the right thing to do to keep families together and communities strong, but this research makes it equally clear that it is also wise, economic policy,” said Darcy Tromanhauser, Immigrants & Communities Director at Nebraska Appleseed. “Creating common-sense laws and a clear process for citizenship would only strengthen the economic contributions immigrants make to our communities.”

Besides increasing tax contributions, the Council of Economic Advisers (CEA) and the Center for American Progress (CAP) both conclude that immigration policy reform and the President’s executive actions will have broader positive economic effects as well. Both groups estimate positive effects on labor market growth and productivity, as well as wages and economic growth. The CEA estimates that the executive actions alone will increase national GDP by 0.4 percent over 10 years, while having no impact on the likelihood of employ­ment for U.S.-born workers.

To view the full report or to find state-specific data, go to www.itep.org/immigration/