On December 2, Nebraska state senators again witnessed the high human and financial cost our state is paying by not closing the coverage gap that leaves at least 54,000 working people unable to get health insurance.

The Legislature’s Health and Human Services Committee convened for a hearing on interim study LR 601 to study the effects of implementing or failing to implement the Affordable Care Act’s new Medicaid provision. 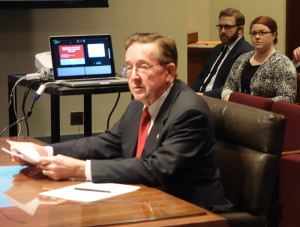 State Senator Al Davis of Hyannis was the sponsor of interim study LR 601.

Bills that would have adopted this provision to close the coverage gap and bring more than $2 billion back to Nebraska’s economy have been filibustered during the last two legislative sessions.

State Senator Al Davis, who introduced the study, pointed out Nebraska has forgone more than $930,000 per day that could provide health coverage to low-income, working Nebraskans while supporting the state’s health care delivery system.

James Goddard, director of Appleseed’s Health Care and Economic Justice programs, testified to the committee that medical debt contributes to a significant percentage of Nebraska bankruptcies, which harm local economies.

Goddard delivered a presentation to the committee showing bankruptcy data in three Nebraska counties in which medical debt was a large factor. 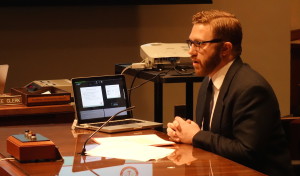 “A lack of health insurance is a clear theme running throughout, and the majority of the debt is held by local businesses within Nebraska’s borders,” Goddard said.

If the financial detriment alone is not reason enough for the Legislature to make the right choice to close our coverage gap, Lincoln’s Amanda Gershon provided a powerful example of how being unable to get health coverage is a life-and-death matter for many people across our state.

Amanda is fighting autoimmune disease and is uninsured. Battling health problems has drained her savings and medical debt forced her into bankruptcy at age 22. Now 32, Amanda may need to file bankruptcy again as she continues to fight for her life. 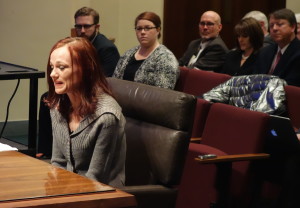 Lincoln resident Amanda Gerson told the committee she is unable to afford the health coverage she needs to treat autoimmune disease.

“I can’t keep doing this. I can’t,” Amanda passionately told the committee. “In the few years of my life that I had insurance, I had excellent credit. I had a home, I had vehicles, I had food on my table, I had no worries. … But left with no insurance, I’m back to that starting point again.”

Ensuring all Nebraskans can get quality, affordable health care remains both a moral and financial imperative.

Our health care system must make sense for everyone. The Legislature has a chance this session to stop the needless waste of our tax dollars and improve the health of thousands of our friends and neighbors by closing the coverage gap.

Other media coverage of LR 601

Associated Press: Groups: Lack of coverage a factor in bankruptcies