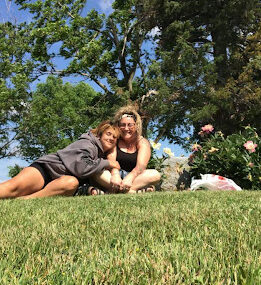 Kayla Tobey works at the Mental Health Association of Nebraska in Lincoln. In her job, she supports people struggling with substance abuse and mental health issues, as well as folks navigating reentry from incarceration to get back on their feet. She’s a mother and is expecting another child in June.

Back then, Kayla struggled with her own mental health and wellness. Drugs started as a way to cope and became a severe addiction. She knew that the drugs weren’t a good choice, but at the time, she had very few resources or support to deal with her issues more constructively. Eventually, Kayla found herself caught up in a bad situation with her boyfriend at the time, got charged, and convicted of conspiracy to manufacture and distribute a controlled substance, and was sent to a federal corrections facility in 2007.

Conspiring to do something is not the same as doing something. My boyfriend was the drug dealer. I’m not saying I wasn’t involved but I wasn’t a kingpin either. I was 19 years old.

Over the next 6 years, Kayla spent time first incarcerated, then in federal treatment programs, and ultimately was able to complete her sentence after a stay in a reentry facility. In 2007, while she was still incarcerated, Kayla had her daughter. Upon release, Kayla was met with the all too common challenges associated with reentry: struggles to find a job, find housing, and access to transportation. But Kayla also had a much bigger focus: her child. It was difficult to establish a relationship with her daughter who was 6 years old by the time of her release even though every choice she made had her daughter at the center. Lack of food was a daily strain. Because Kayla’s income counts against her daughter’s SNAP eligibility, when Kayla started working, her daughter’s benefits went away. This made it all the more difficult to feed her daughter.

It’s tough to be in this position where you’re newly parenting your kid. You’re looking for any opportunity to bond with them and build their trust. SNAP would have meant so much to me because I would’ve been able to take her to the store and let her do little things like choose her own cereal and that would’ve made such a difference as we made this transition.

For many, turning to the Supplemental Nutrition Assistance Program (SNAP) is a solution, at least in part, to the problem of food insecurity.

In Nebraska however, the SNAP ban prevented Kayla from having a resource to lean on as she worked to make a fresh start.

In Nebraska, people convicted of certain drug-related felonies have a lifetime ban from SNAP. Federal law created this ban in 1996, along with other racially-charged and ineffective War on Drugs legislation. The law specifically limits the ability of people reentering our communities to get the food they need after serving their debt to society – essentially double punishing people for the same crime. State law can modify this ban, which Nebraska has done, to create a small exception for those who have been convicted of 2 or fewer possession or use charges and completed a state-approved treatment program. Those who are convicted of distribution-related offenses are banned for life, even after they complete their sentences.

Today, Kayla spends her days busy at work supporting others with their mental health, dependency journeys, and reentry.

She says that helping others with their addiction helps her maintain her sobriety. Although she is ineligible for SNAP, her child can still receive it. The only caveat is that Kayla’s income counts against her daughter’s SNAP, meaning that benefits for her child are reduced. Kayla doesn’t think that’s right.

If I stay home and don’t do anything, my daughter gets benefits but I can’t pay my bills. If I go to work, I can pay more of my bills, but my daughter loses all of the support she had. It’s really a catch-22.

This year, the Nebraska Legislature has a chance to end the lifetime ban on SNAP through Senator Megan Hunt’s LB121.

In a year focused on legislative issues like criminal justice reform, building a new prison, and addressing poverty stemming from the COVID-19 pandemic, Kayla’s hopeful her story and others like it can make a difference. Kayla is one of nearly 1,000 Nebraska families to be denied SNAP benefits due to the lifetime ban.

The reason why LB 121 is so important to me and my family is that it would help alleviate some of the financial burden of being a single parent and trying to provide proper nutrition to my children. I believe that no one in this world should go hungry no matter what mistakes they have made in the past. This bill would benefit so many others like me that are using the system for what it is designed for…..and that is a stepping stone to stability and financial wellness overall.

It’s hard to predict when a lifeline like SNAP will be needed.

Ending the lifetime SNAP ban is a change that could make an impact now and right a decades-old policy that looms over Nebraskans, and limits food security for our communities to this day.

It’s past time to make this change and we call on Nebraska’s legislature to pass the bill this year.