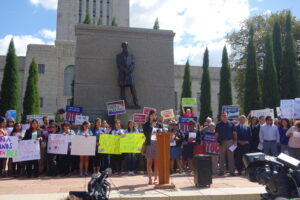 LINCOLN – Today, Nebraska civic, business, and faith leaders joined Nebraska DREAMers at a State Capitol press conference attended by approximately 500 people to show broad support and appreciation for young immigrant Nebraskans who have been able to contribute their skills and talents to local communities through the Deferred Action for Childhood Arrivals (DACA) program.

The outpouring of support comes as DREAMers – young immigrant Nebraskans who grew up in our communities – face the urgent threat of DACA ending. This morning the Trump Administration announced it would end DACA after a “wind down” period of six months – March 2018, instantly creating extreme uncertainty for Nebraska families, businesses, and communities.

“The community of Crete is made up of generations of immigrants,” Crete’s Mayor Roger Foster said. “I couldn’t be prouder of our DACA youth and their families for continuing the tradition of contributing to our community. In Nebraska we speak of pride, work ethic and retaining our best and brightest students.  In the community of Crete, these families exemplify the values we so cherish as Nebraskans. It’s important to the future we welcome them.”

“When I was younger I was always told that I could never have a career or achieve anything that I wanted, like going to college, finding a job, or getting a driver’s license,” said Atziri Valadez, a Nebraska DACA recipient who has lived in Nebraska since she was 11 months old.  “When DACA was introduced in 2012, the things I was told I would never be able to achieve were finally achievable.  DACA has given me so many opportunities I am grateful for.”

“It does not matter where I came from. What’s important is how hard I am willing to work to succeed in my future,” said another Nebraska DACA recipient named Ana.

DREAMers have a long history of contributing to Nebraska’s communities, a fact recognized by business, agriculture, civic, faith, and education leaders across the state. A group of more than 70 such leaders have signed a letter to Nebraska’s Congressional delegation (included in packet), asking them to put the protections of DACA into federal law to preserve stability and protect opportunity for DREAMers and their families. Nebraska’s universities and additional legislators have signed similar letters.

“I’ve had the opportunity to meet with Nebraska DREAMer youth from all across the state. Their talents, energy, and enthusiasm for local communities are an enormous asset to Nebraska,” said Jim Partington, executive director of Nebraska Restaurant Association. “Together with a Nebraska coalition of civic, business, and community supporters of common-sense immigration laws, I’ve also had the opportunity to hear Nebraska’s appreciation for the contributions of DACA youth – in the Legislature and in communities across the state.”

Ending DACA with no immediate action by Congress would come at an enormous social cost of separating Nebraska families. It also would have severe implications for our state economy. The Center for American Progress estimates Nebraska would lose $144 million each year in economic output if DACA was ended, as part of a national GDP loss of $433 billion over the next 10 years.

Several bills, such as the bipartisan “Dream Act of 2017,” recently have been introduced in Congress that would allow those covered by DACA and other similarly situated to have a way to apply for immigration status, and eventually, be able to earn U.S. citizenship.

Rep. Don Bacon (NE-2) is a cosponsor of H.R. 1468, the “Recognizing America’s Children Act,” and H.R. 496, the “BRIDGE Act,” two bills which would protect some young Nebraskans from deportation.

Nebraska Appleseed Immigrants & Communities Director Darcy Tromanhauser said it is now imperative for Congress to take immediate action to protect Nebraska DREAMers and their families so they can keep contributing to the state they call home.

“Congress must swiftly pass a bill that upholds the unity of Nebraska families and allows us all to benefit from what these young Nebraskans contribute to our state every day,” Tromanhauser said. “We also hope Congress comes together to adopt common-sense immigration laws that reflect our values and keep Dreamer youth and their families together.”