Celebrating the 10th anniversary of the Affordable Care Act

Today marks the 10th anniversary of the Affordable Care Act (ACA)! The ACA has dramatically altered the health care landscape across the United States, including here in Nebraska, and has been a driving force in Appleseed’s work since before its passage.

Fighting for Nebraskans’ access to quality, affordable health coverage has long been a core piece of Appleseed’s mission. 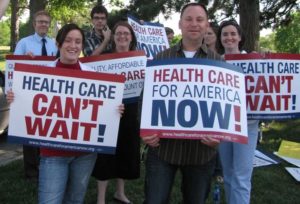 Alongside many of you, Appleseed worked tirelessly in 2009 to pass the ACA through grassroots mobilization and advocacy. There were rallies, press conferences, phone banks, letter deliveries, and trips to Washington DC, all while standing alongside and lifting up the stories of Nebraskans in all corners of our state whose lives would be changed for the better by simply being able to access coverage through the ACA. People who faced preexisting condition exclusions, people who only had access to catastrophic health insurance plans that didn’t allow them to get regular check-ups and preventative services or be seen and treated for a sinus infection or strep throat. Senator Ben Nelson’s support of this bill was essential to it passing, and thousands of Nebraskans let him know they wanted him to vote yes on the ACA. And, when the Senate voted, he voted yes. On March 23, 2010, President Obama made the ACA the law of the land, signing into law the most significant change to our health care system in a generation.

The ACA has dramatically increased the number of Americans with health insurance.

By 2016, the United States had the lowest uninsured rate in recorded history, largely due to states expanding Medicaid coverage, but also due to the availability of subsidies on the Health Insurance Marketplace and the ability of young adults to stay on their parents’ plans until age 26. Prior to the ACA, 45.5 million Americans were uninsured. By 2016, that number had been cut to 26.7 million. And, that number could have been reduced even further had all states made the decision to expand Medicaid coverage to adults in the coverage gap. Under the ACA, all states were to expand their Medicaid programs to low-income adults not otherwise eligible for Medicaid; however, in a 2012 decision, National Federation of Independent Business v. Sebelius, the United States Supreme Court made Medicaid expansion an option rather than a requirement. Currently, 37 states, including Nebraska, and Washington D.C. have taken up the expansion option, meaning that there are coverage gains that could be achieved in the remaining non-expansion states. Over 90,000 Nebraskans are covered through the Health Insurance Marketplace this year — more than any other year — and 90,000 more stand to gain Medicaid coverage once expansion is implemented.

In addition to reducing the number of uninsured Americans, the ACA also led to reductions in racial and ethnic disparities. While all racial and ethnic groups saw reductions in the number of uninsured, because Hispanic and African American adults had higher rates of uninsurance before the ACA than their white counterparts, the coverage gap between black and white Americans and between Hispanic and white Americans was reduced greatly between 2013 and 2017. The reduction in disparities is strongest in states that have expanded Medicaid. While there is a great deal of work left to be done to fully eliminate disparities in health care, opening up access to groups that have been previously underserved by public and private insurance coverage is a critical stride forward.

Americans no longer have to worry about being denied coverage due to a preexisting condition. 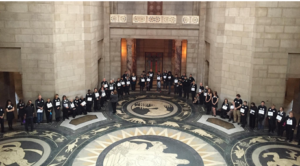 The ACA has also improved the coverage that millions of Americans receive and increased crucial protections for consumers. No longer do Americans have to worry about being denied coverage due to a preexisting condition. The Center for American Progress estimates that 135 million Americans under age 65 have a preexisting condition, including nearly 800,000 Nebraskans. Women can no longer be charged more for coverage based on their gender, something that occurred in 92% of the best-selling insurance plans prior to the passage of the ACA. There is also the comfort in knowing that all plans sold on the Health Insurance Marketplace must include the same set of robust benefits, known as the 10 Essential Health Benefits, meaning consumers have access to a full range of care, including free preventive services. Additionally, there are no longer annual and lifetime limits on coverage.

That said, we know the ACA is not perfect, and this last decade has not been without challenges. There have been continual threats to the ACA in the form of congressional attempts to repeal the law, the lack of full implementation, the repeal of individual provisions of the law, and multiple court cases challenging its existence. In fact, a current case challenging the ACA will be heard by the United States Supreme Court this session. In recent years, we have seen coverage gains decline and the number of both uninsured children and adults increase. Experts at the Georgetown Center for Children and Families, in analyzing the increase in uninsured children, point to barriers to enrollment, such as increased red tape and reduced funding for outreach and enrollment, and attempts to repeal the ACA and cut Medicaid as potential reasons for these declines. These factors could be applied to adults, as well. Also, cost continues to be a barrier to enrollment.

The ACA is a foundation upon which we can build to ensure all Americans are able to get the care that they need. Just as we stood with you to pass the ACA in 2009, to fight against its repeal in 2017, and to push for six years in the legislature before passing Medicaid expansion on the ballot in 2018, we will keep fighting. Work still needs to be done to ensure that the 90,000 Nebraskans who are eligible for Medicaid expansion can access the program without barriers to coverage or restrictions on benefits. We know that Medicaid expansion has reduced premium costs for people with insurance, and this is just one strategy to reduce health care costs.

We appreciate your advocacy over this past decade and look forward to working with you to ensure that all Nebraskans are able to access quality, affordable health care now and in the future.

← RELEASE: Nebraska Advocates Urge Action to Protect the Health and Safety of all Nebraskans
COVID-19 Resources for Older Youth in the Child Welfare System →